Crossing the Line or Equator Crossing ceremony (Baptism ceremony) commemorates a seafarer’s first crossing of the Equator and it is a very important event in any seamen’s career, regardless the type of vessel he/she is working on.Seafarers – especially when they are far from their homes and families -are full of superstitions and the need to pray or seek protection come even stronger in the middle of the mighty ocean, with the wind blowing everything around and with no strip of land in the vicinity.

Showing gratitude towards the sea and its masters may come in the form of a whispering pray behind the four walls of your cabin, but it sometimes requires a loud shout and a real ceremony which must be attended by everybody else on board. 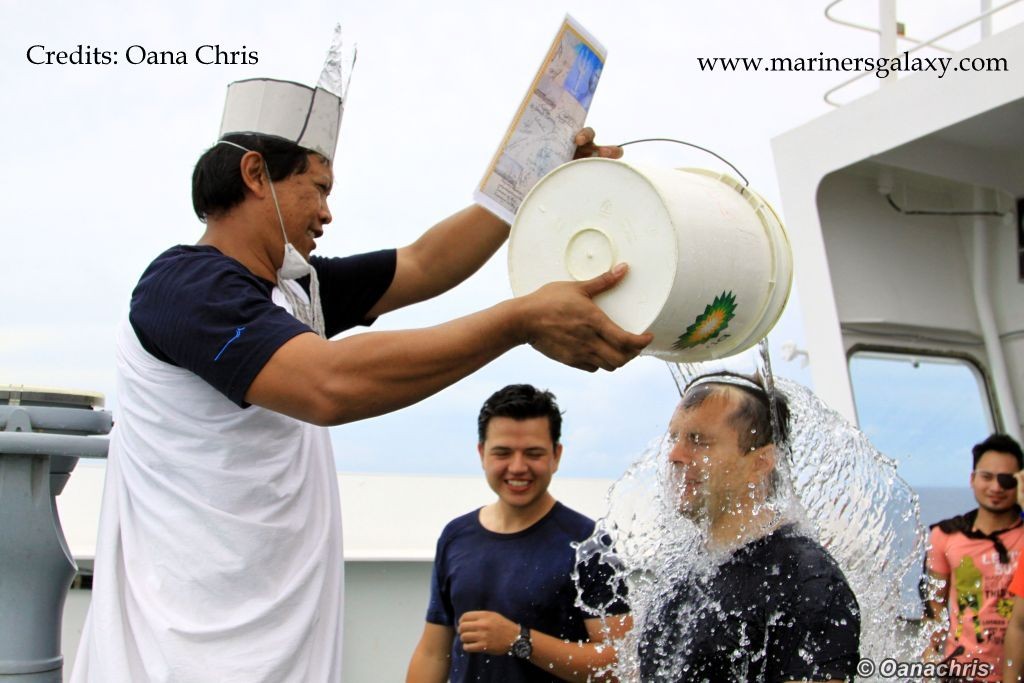 Crossing the Equator is a great opportunity for seafarers to receive blessings and show respect towards the Gods of Sea and Earth. Some people may find this a silly game, but seafarers know for certain that receiving the blessing from the God of the Sea is always an honor and must be regarded as such.Equator Crossing ceremony is just a humble way of recognizing Neptune as Master of the Seas and all the seafarers who receive Neptune’s permission to sail his waters have to be celebrated and congratulated by all the crew on board. 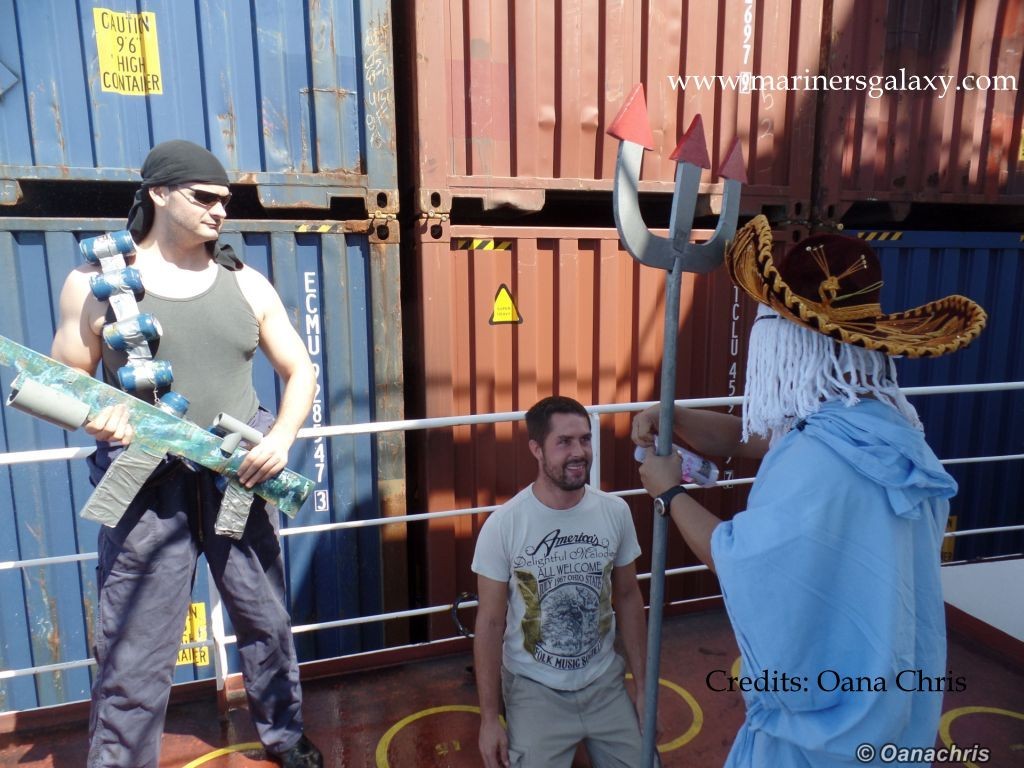 On the other hand, the ceremony’s goal is to ensure that the new comers are capable of facing and handling rough seas and are ready to be called sailors. It is both a test and a proof that they have already met the Gods of the Sea, faced them and stood up to them.  From that moment on, they are no longer seen as outsiders, but they fully deserved to be included in the seafarers’ family. Read about: Joining Ship? What you should not forget.

It is a ceremony which has its roots centuries ago when the first adventurous discoverers started their quest for the unknown seas in all four corners of our planet, taking untraveled routes and praying for Gods to bring fair winds, good captures to take back home and pirate free waters. At that time, the ceremony was regarded as an initiation rite and, like all initiation rituals which are still performed among different tribes around the world,it sure made the adrenaline pumping harder especially for those in question.
The ceremony could include funny and naïve games – like moving on hands and knees on slippery decks – but more humiliating, difficult and dangerous tasks as well – like crawling through barrels of garbage or oil, jumping overboard from high decks or climbing on top of the mast and being forced to spend hours in the same position. 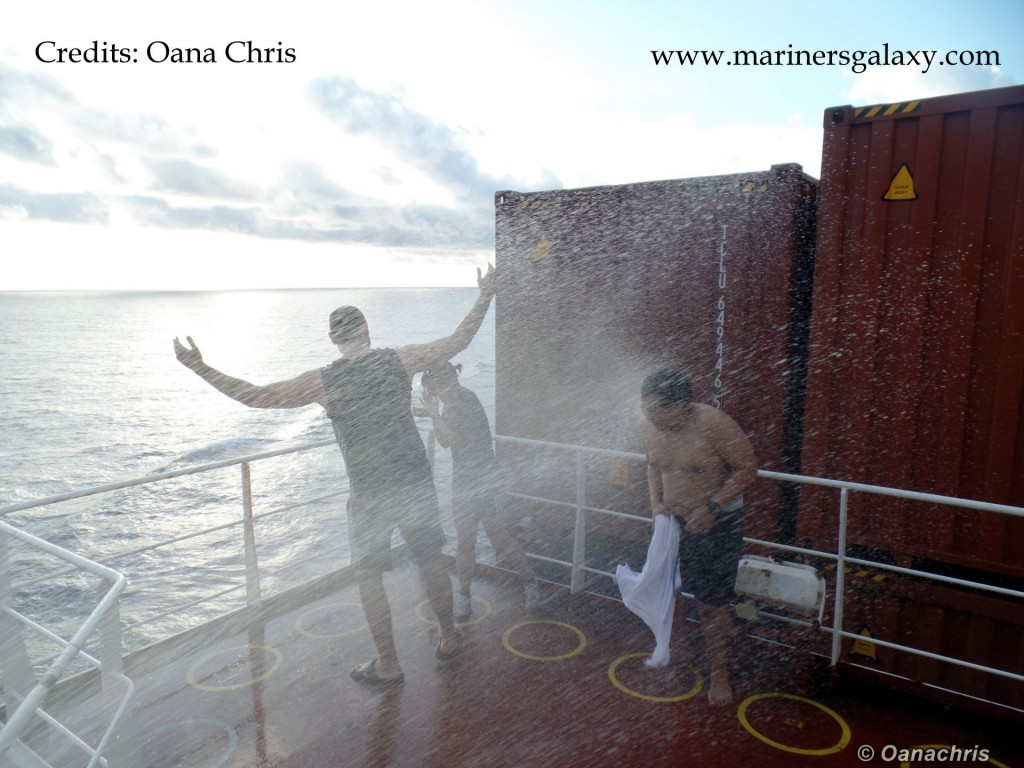 The older and more experienced sailors were always so happy to perform the most outrageous tricks and games on the new comers that they sometimes crossed the limits of entertainment and brought ‘the game’ to a dangerous and even deadly point. Many cases of unbelievable cruelty were reported – especially in the years after the II World War – and some maritime companies even banned these ceremonies on board their vessels.

In the last decades of the 20th century, the Crossing of the Equator or Equator Crossing Ceremony took the form of a joyous celebration meant to entertain the whole crew, by offering everybody on board a few hours of fun and relaxation. 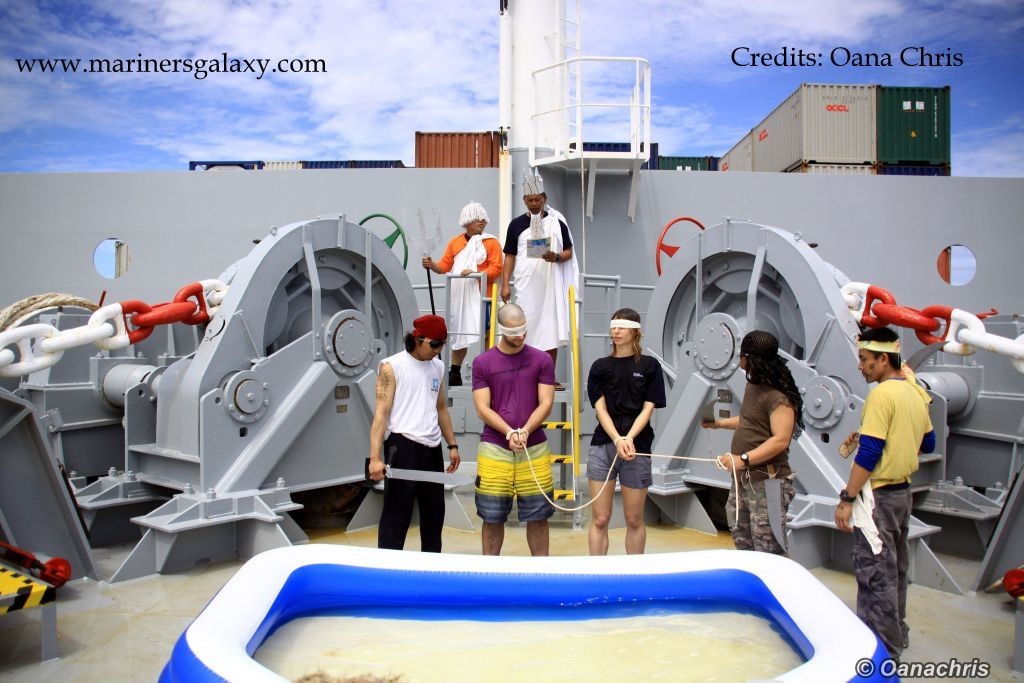 There are still cases in which seafarers are put to difficult and embarrassing tests – sometimes humiliating and even painful experiences – in order to receive the ‘blessing’ of a very ‘unkind and unfair God’.The ones who received the same harsh treatment years before are more likely to perform the same unkind ceremony on the new comers and the more humiliating the situation is the happier they are. In this case, the whole ceremony can turn into a complete nightmare for the young seamen who would rather forget about the event than recording it in hundreds of photos and movies.

Anyhow, as people on board grow more and more connected with each other – by sharing the same interests, leisure activities and hard work – this kind of ceremony becomes less and less popular.

When the ceremony is organized and supervised by intelligent and kind persons – regardless of age, rank or nationality – the event takes the form of a happy celebration in which all the crew has a great time.

Nowadays, the most common ceremonies always include at least two members of the crew willing to conduct the show, the fire hoses ready to splash, glasses of ‘miraculous’ drinks, baptism certificates, a noisy and supportive crowd and a well deserved party afterwards. 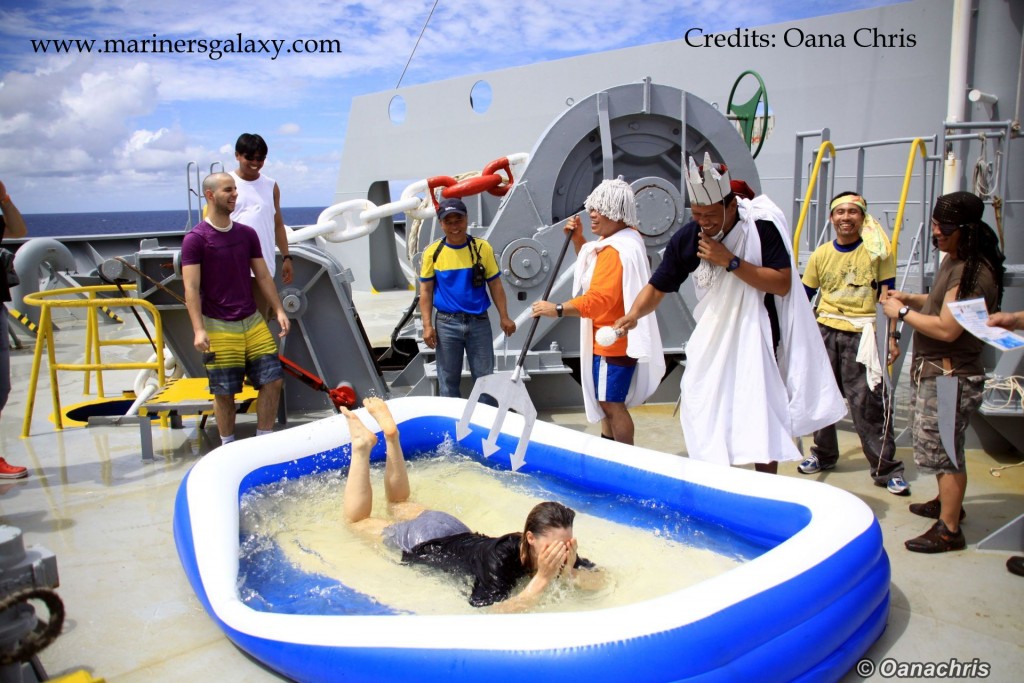 Usually, the role of Neptune is played by an experienced sailor – dressed up in a funny handmade costume – with other crew members acting as imaginary creatures helping him to perform the ceremony and captain acting as a mediator between the two parts.

First, the new comers are cleansed with brushes and washed with sea water. Then, they are offered a glass of red liquid –a combination of sea water and spices – which must be drunk thoroughly. In the end, Neptune reads out the certificates – stating the names of the seafarers, their new names after the ceremony, the date and the place where the event took place – and welcomes into the ‘family’. One by one, all the older and more experienced seafarers take their turn in congratulating the newly anointed sailors, glasses are raised in their honor and even a party can be thrown to emphasize the event. Seafarers may cross the Equator after many years of sailing both the North and South Hemispheres, but in different voyages – as they can join a ship in the North and spend as much as nine months travelling the seas in the same part of the Equator, or they can do this in the South without the possibility of crossing ‘the line’ by vessel.

In order to ensure that all the seafarers show their gratitude towards the mighty sea and receive the blessing from Neptune at the beginning of their career and not wait until they have the chance of crossing the Equator, more and more ceremonies are undergone for the first voyage at sea as well. Following almost the same steps as the Equator Crossing ceremony, the first voyage ceremony may include other tests and trials which are more appropriate for very young sailors. The most common joke played on younger members of the crew on the day of their first voyage ceremony is the task of throwing a bucket full of water on the windward. 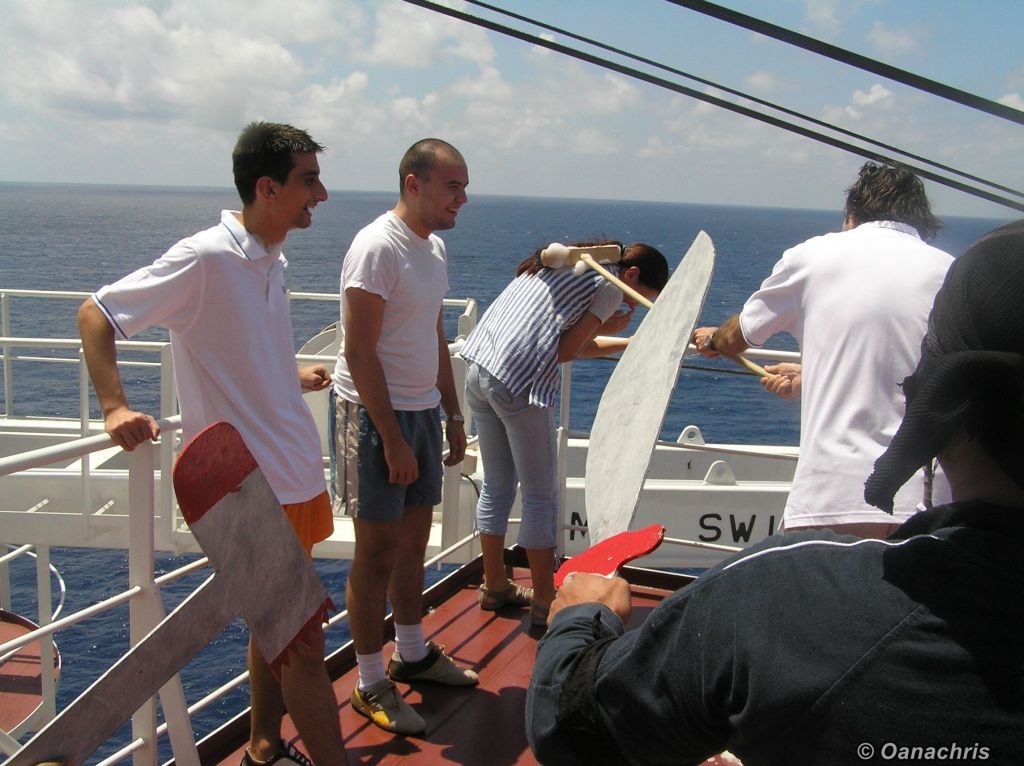 Many seafarers who happen to cross the Equator on their first voyage are sometimes put to a different test and asked to confirm the red/yellow colour of the Equator. Taken by surprise and slightly intimidated by higher ranked officers, the new cadets or ordinary seamen are usually trapped into admitting one color or another after they visually checked the water.

“I had my baptism ceremony nine years ago, in the beautiful waters of the Indian Ocean, somewhere North of the Seychelles Islands, while heading towards the West Coast of Australia. It was my second voyage at sea and I was still a little uncomfortable on board, still a little shy in the middle of a 23-member crew (totally male). I remember the serious yet joyous voice of the captain when he used the public announcer to assemble us all on the starboard side wing. I remember the shock I had as soon as I discovered that half of the Filipinos on board were gathered there, some of them dressed up like pirates – with funny dresses, tattoos, wigs made up from cleaning mops and a whole arsenal of wooden weapons. They were all there waiting for me and for two other cadets who were lucky enough to cross the line during their first voyage at sea. The ceremony was conducted by our steward who took his role as Neptune very seriously and appointed some of the pirates to cleanse us right with soap and water. After we drank our glasses with that awful tasting liquid, we received our certificates together with everybody’s congratulations and enjoyed a wonderful party thrown in our honor. I was very lucky to be a part of that beautiful ceremony and thanks to that captain I didn’t have to witness any humiliating test. He actually told me that he had never agreed to humiliating or painful trials for the new comers because the strength of a real seafarer stays in his heart, his wisdom and his kindness and these qualities can not be tested through silly, humiliating or painful ordeals.“ 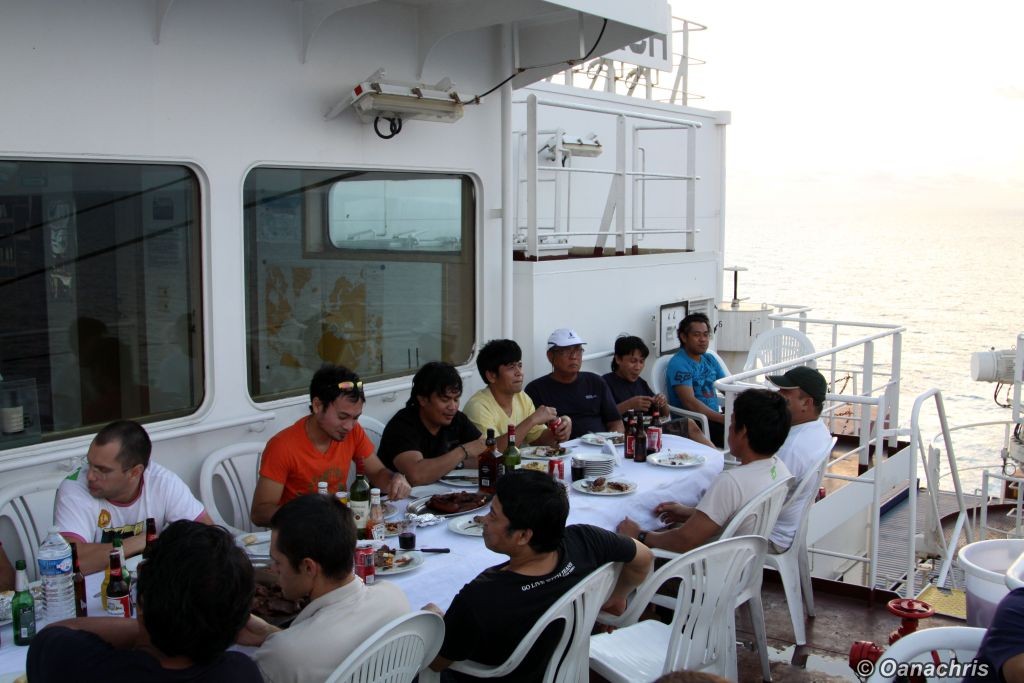 Since then, I had the privilege of witnessing many ceremonies of this kind and all of them fell under the same pattern. They never turned into a nightmare for the new comers and they were accompanied only by laughter and happy faces. They were always followed by a barbecue party with good food and music and the hundreds of photos taken during the event were always shared with families and friends as a proof of being recognized as a true seafarer.

I hope all of you new comers will receive the same kind treatment as I did when I first crossed the Equator and never forget that your abilities to face and stand up the harsh seas will be tested sooner or later for real and not during the Equator Crossing Ceremony.

May you always sail in safe seas and always find your way back home!

Oana Ungureanu
My name is Oana and I come from Romania. I love the sea and all the beauties it brings along, I love travelling, nature and taking photos.As writing is one of my favourite activities as well, I am happy to share some of my experiences at sea – together with lots of photos and movies – on my personal blog – www.travellingoncontainervessels.com

Last month pirates on the West Coast of Africa near Benin attacked a container vessel – Tommi Ritscher and kidnapped 8 crew members including Captain of the ship. Bulgarian nationality Captain, along with other crew members, was in captivity for more than 1 month as we see from the news that is coming from various […]

Marriage is the one of the biggest decision of a girl’s life. And when marrying a sailor, she has to think through all the related parameters before she can take this step. Unfortunately to marry a sailor, a girl has to broaden her parameters and think on different lines. Certain extra parameters can be listed […]

One Reply to “Equator Crossing or Baptism Ceremony-All About it”