Its a once in a lifetime experience when you witness an extraordinary work of engineering, an artificially made marvel where millions of litres of water is used for transiting the ship each time from one ocean to another. It majorly consists of lock gates on either side and a man made lake which cuts through small islands and mountains and that too without disturbing plants and animals living in their natural habitat. Sounds interesting! That’s the Panama Canal.

Since the day I joined the vessel we were only doing short runs from USA to Mexico. I was fed up a little bit as again the next voyage was supposed to be the same, but my husband told me that though we are going from USA to Mexico, this time it will be different as this time we will transit the Panama Canal.

I had heard about it but never have been able to imagine how a canal looks like which just cuts across a country thereby giving me a chance to travel from the Atlantic ocean to the Pacific ocean within a matter of 12 Hrs.

PANAMA CANAL- A Brief Introduction to it

Panam Canal (Canal de PanamÃ¡) is an artificial waterway that connects Atlantic Ocean and Pacific Ocean (or vice-a- versa). The canal cuts across the Isthmus of Panama and is conduit of maritime trade.Canal locks are there at each end to lift up the ships an astonishing 26 mtrs above sea level to an artificial lake named ‘Gatun Lake’. Its hard to fathom that this masterpiece engineering beauty was made way back in the year 1914, its more than 100 years ago! 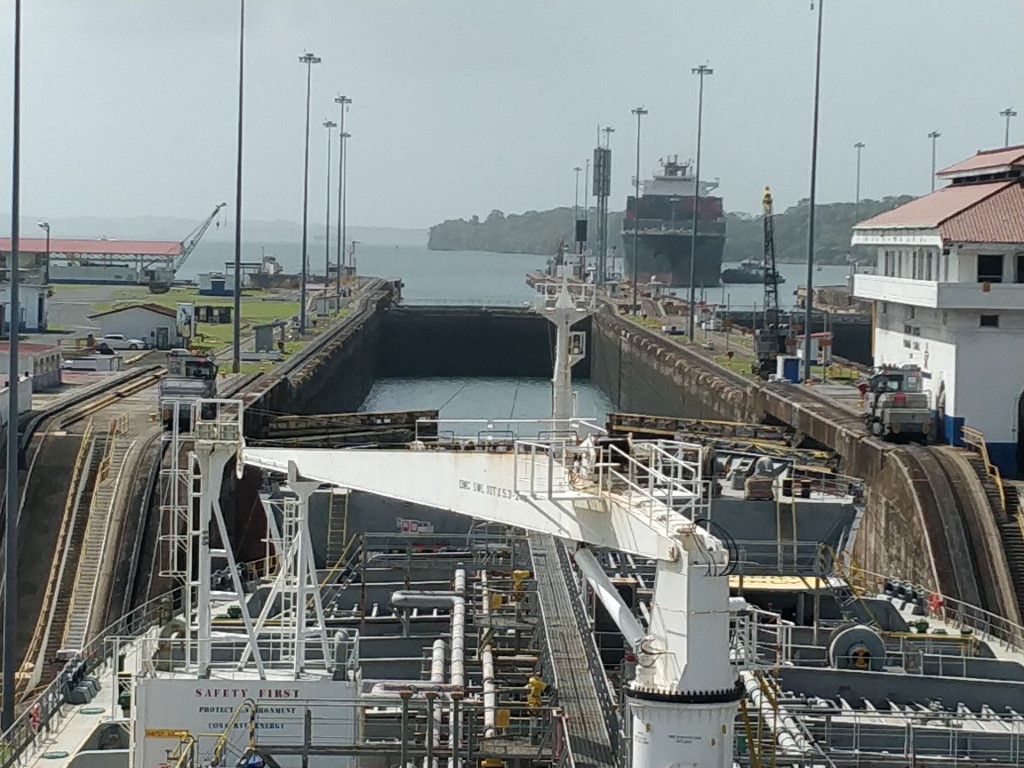 Where as a normal ocean route takes a minimum of 20 days sailing to travel from one ocean to another depending which ports you are visiting, this canal allows an easy travel within a matter of 12 hrs. Ofcourse, For this transit company needs to pay toll to Panama canal authority and book the slot for the transit as many vessels pass through the canal daily and then arrangements are to be done beforehand. But this toll is still less than what companies have to pay to make a trip around south of south america.

Our transit was scheduled on 14th jan 2020. Before entering the Panama Canal 2 Pilots boarded the vessel for navigation. As it is a very critical maneuvering operation and precise navigation is required, our vessel had to take help of 2 tug boats. The vessel takes various turns and moves towards the canal entrance. Just before entering the lock gates approx 20 panama canal crew get on the vessel for mooring the vessel. This mooring crew secured our vessel by taking wires from a number of small train like machines which are called locomotives. These locomotives guide the vessel along the lock gates as the width of the gates is almost the same as the width of the vessel. Any small error during this phase will lead to a collision of the vessel with gates leading to a maritime disaster. 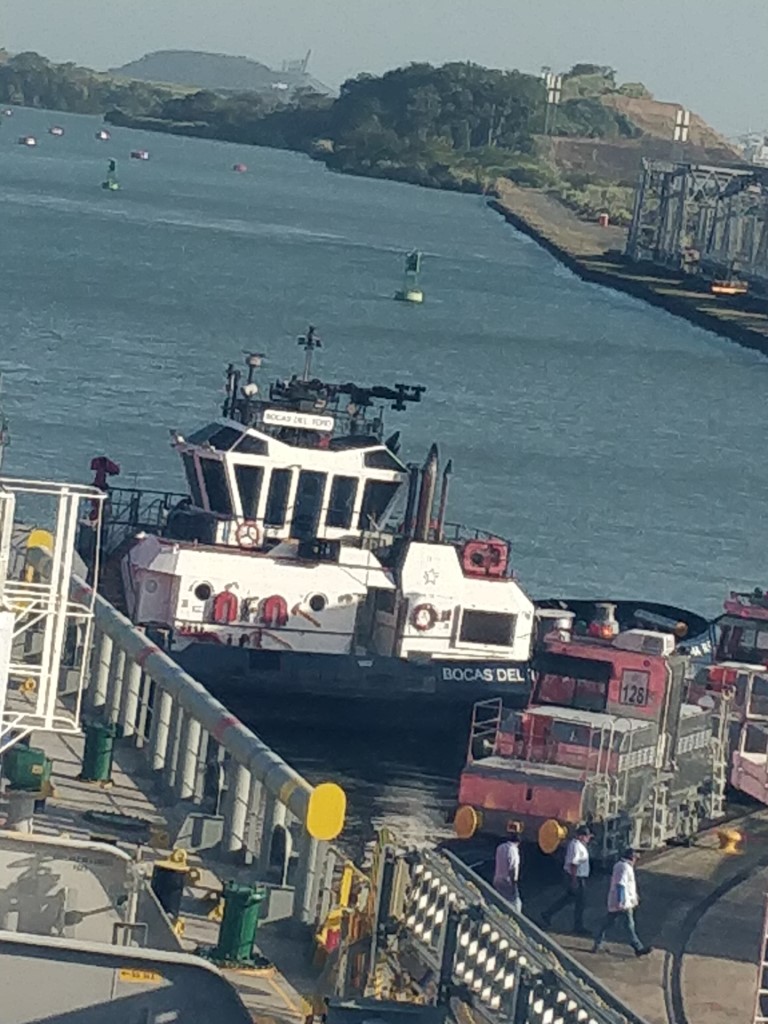 So with the help of locomotives we passed through 3 gates. The moment First gate gets open and you move forward the lock gate behind you closed and water gets filled up, you are lifted up and few metres. During this lifting up the second gate is ready to receive and lifts you up again a few metres. Finally the third gates open and vessel enters the Gatun lake. The mooring crew immediately casts off the locomotive wires which they just kind of throw in water with a big splash before the locomotives just easily heaves it up back. It looks risky but at the same time interesting. The way this whole process of gates opening and closing, filling up of water to lifting up of the vessel is seriously worth watching. During this whole phase the ship gets lifted up from lower level of the atlantic toa kind of 3rd level which is 26 metres up from the sea level! Experience of Crossing Panama Canal was great!

This is such a different experience as you don’t even feel that your vessel is moving up, however when see and compare with shore objects or when you just look back towards the Atlantic then you realise that yes indeed you are quite above the level the Atlantic ocean. Once we were in the lake these 20 canal crew get off and the navigation is continued by pilots as it’s a transit of another few hours before we reach the other lock gates which will drop us down to the level of the pacific ocean. With a beautiful side view of mountains,small water channels and many turns around these lush green islands,the natural beauty here has to be seen to believe. Also, its worth mentioning that a slight drizzle along way enhances the overall scenic beauty thereby making it a mesmerising experience. 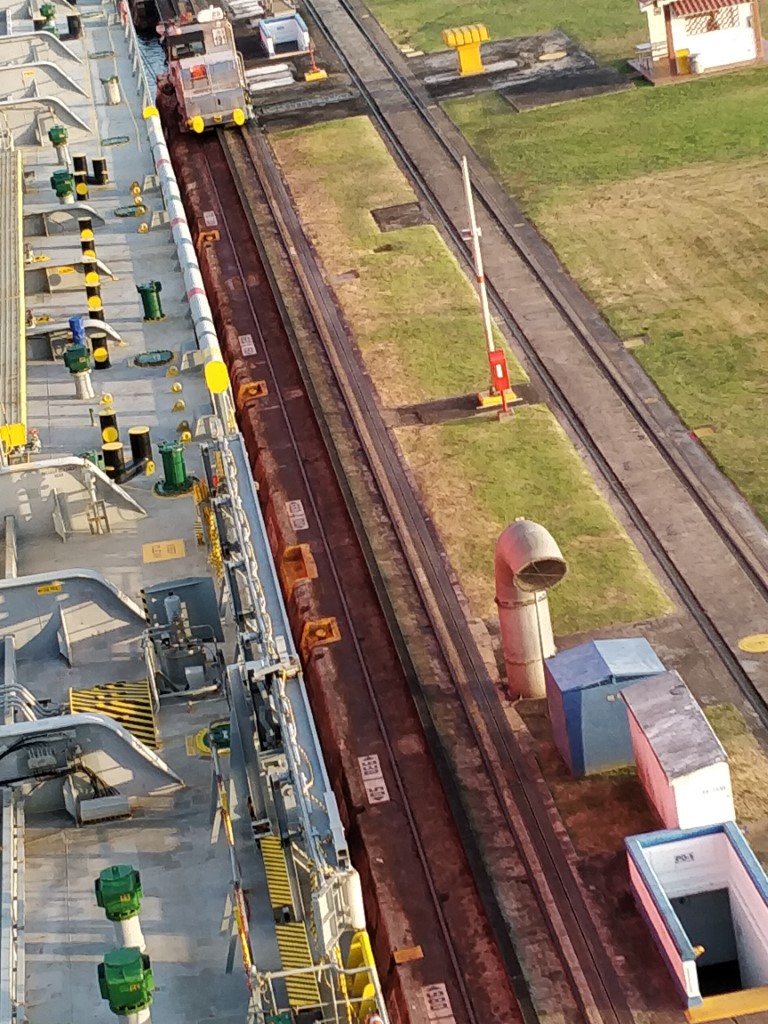 Various other vessels pass close by which sometimes seems as if they are about to collide with our vessel or sometimes it feels as if you may just end up on any of these small islands but these pilots in a routine manner navigate you safely, clear of any dangers.

After few hours we reached the other set of lock gates which were supposed to drop us down to the level of the pacific ocean. Again 20 odd canal crew boarded and with help of locomotives the vessel dropped down passing through 3 lock gates. Here we saw thousands of tourists gathered at a point to see vessels transiting through these gates. And Yes, they are charged a good amount for watching this majestic view.

Finally after about 12 hrs we were out in the Pacific ocean, dropping those two pilots in there small boat and then continuing our journey at full ahead to other part of Mexico.

After The Transit of Panama Canal

The artificially made Gatun lake, the lock gates, locking and unlocking of gates, rising and falling of the vessel along with an eternal scenic view was without a doubt, Mesmerizing.No wonder it has been designated as one of the” Seven Wonders of the Modern World” and “A Monument of the Millennium”. It was truly a lifetime experience for me and I feel extremely lucky to transit The Panama Canal.

This Story is continuation of the previous story: Here you can read the previous part : Those 24 days of February I Cannot Forget Anay was already departed from Mumbai for ship. Through out all his journey we were connected through Skype and what’s app. At this stage both of us were aware about the arising […]

USS Theodore Roosevelt started to embark sailors again on the ship after all of the sailors finished their quarantine period. But during check 13 sailors who tested negative two times after they recovered from covid-19 disease, showed positive results. Called as relapsed cases, they have been again put in isolation and also the people who […]

“Time and tide wait for none” , seems like corona virus also doesn’t! So this is my third sail in the last 4 years of being married to a sailor. And just as expected , I’m as excited and thrilled to be on board as the first time. Corona Virus and My Sailing-True Story Even […]