A letter from a chief officer to his company has come into social media in which it can be read that he resigned from the rank of chief officer. The reasons mentioned in this are mental stress and physical exhaustion. This is most probably due to late sign off as you can see the joining date of the chief officer is 22 October, so he is already at sea for more than 7 months.
More News: Seafarers To Get 40% More Salary Due To Late Sign Off
As mentioned in the letter, he is unable to focus on the work, and precautionary measured he is telling the company in advance, so that safety of the ship is not compromised. A person at such a rank is always under stress and being at sea for more than 7 months, well that is quite stressful. It is also to be noted that lockdowns all over the world have forced crew change to come to a complete haul. Chief Officer can be seen asking for his repatriation from the company. With seafarers matters petitions getting good response, we hope the crew change is possible in coming weeks. Mental stress during these times have started to affect seafarers a lot. #yestocrewchange.
The content of the letter can be seen below: 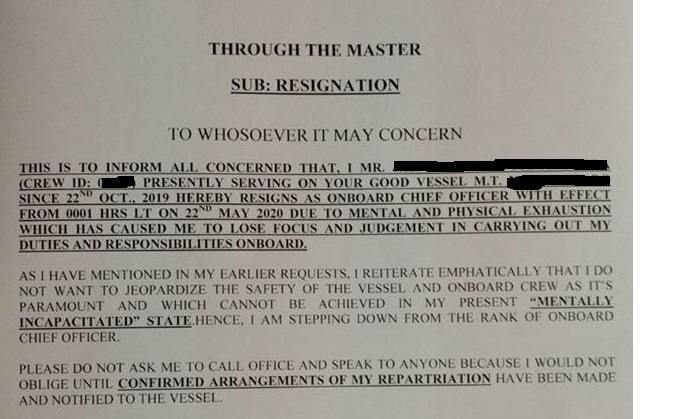 Other News:
Captain and Chief Officer Of A Ship Are Tested Positive For Corona

READ  Ten Tips To A Successful 3rd Mate By- Captain

Do you want look at the best sailor’s memes? Well here is the complete 10 best memes that we have for the sailors. Most of them are quite funny. So these were the best sailor memes, hope you enjoyed them. If you have some more, then please message us and we will add them here. […]

2 Replies to “Chief Officer Resigns on Ship Due To No Sign Off?”