Skip to content
Do you want to know about an aircraft carrier? What they do, why they are made and what is their purpose, which one has how many? Find answers to all your questions here about those beasts like big steel vessels floating on sea.

What is An Aircraft Carrier

It is a large ship provided by government which is available for war having a large deck, which is used for aircrafts to take off from or to land on. Basically an aircraft carrier is a strong and huge base that is available in sea on which fighter planes, army aircraft, carrying aircraft, deploying and recovering aircraft can land and take off. As suggested by its definition it is a big project and also a difficult one. Aircraft carrier is mainly used by the modern navy. 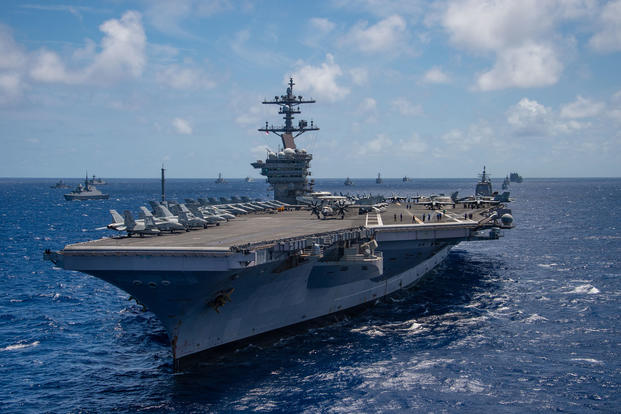 From the very beginning of World War II they played crucial role in modern war fare. Today Naval Forces uses various kinds of carriers and these variants are categorized as sub-types of aircraft carriers. There are four main configuration of aircraft carrier in the service of navy which are as follows: Read this : United States Merchant Marine Academy-All You need to know

These carriers are expensive to build and are critical possessions. They are mostly used for providing a strong attack base on the sea. Since water covers most part of our planet, defense from the sea is more important than at the land. They are like moving cities on the ocean. They can house thousands of soldiers, tons of ammunition and 100s of aircraft to fight on.
See this interesting video on Aircraft Carrier
India is now a part of the list including the names of some great countries that are using aircraft carriers such as USA, UK, China, and France to make their own ships.

Helicopter carriers have appearance same as other aircraft carriers and may have regular fixed wing operations. Some of them are designed so as to include a ski jump ramp allowing for STOVL operations. Currently the majority of helicopter carriers are classified as amphibious assault ship, but not all of them called so, tasked with landing and supporting ground forces on enemy territory. The US has nine helicopter carriers; France has three, the UK one, the Republic of Korea one and Spain one. Read this interesting article on: Life of a Cadet on Sea

Which means that short take-off vertical-landing: carries only STOVL aircraft such as Harrier Jump Jet family and Yakovlev Yak-38 which generally have very limited payloads, lower performance. They have high fuel consumption when compared with conventional fixed-wing aircraft; however, a new generation of STOVL types of aircraft, which now consisting of the F-35B which has a much improved performance as compared to earlier. Aircraft carrier of this type is in service with one for India and two for Italy. Thailand has only one active STOVL carrier but it doesn’t have any operational STOVL aircraft in catalog any more.

A term used for Short take-off but arrested-recover: Carriers of this category are generally limited to carrying lighter weighing fixed-wing aircraft. This is also limited to the type of aircrafts having fewer payloads. STOBAR carrier air wings of the Admiral Kuznetsov are often geared primarily towards air superiority along with fleet defense roles rather than strike/power projection tasks, which require heavier payloads (bombs and air-to-ground missiles). Currently, Russia, China, and India are possessing carriers of this type.

which stands for Catapult-assisted take-off but arrested-recovery:  These type of carriers are generally the ones who carry the largest, the heaviest, and most heavily armed aircraft. Currently three nations in the world are operating these carriers with total of 12 carriers in service, ten by the United States, and one each by France and Brazil.

Aircraft Types On the Basis of their Size

Aircraft carriers can further be classified on the basis of their sizes as:

This carrier is an aircraft carrier smaller than the standard carriers of a navy. However light carriers were intended for higher speeds to be deployed alongside fleet carriers, while escort carriers usually defended convoys and provided air support during amphibious operations.

This is an aircraft carrier which is designed to operate with the main fleet of a nation’s navy. Fleet carriers include super carriers and light carriers both (also called as light-fleet-carriers), and standard fleet carriers as well.
Read this: How much you will earn in Merchant Navy

Is unofficial eloquent terms for the largest aircraft carrier, which displace over 70,000 tons (64,000 metric tons).Super carriers are the biggest warships that has ever built. The United States Navy has ten super carriers till now, while the United Kingdom has two of them.

How Aircraft Carriers are Built

Like any other normal floating vessel they are made in the docks, with different parts made separately and then in the end they are joined together to make it one structure. But the construction is closely monitored by the defense organization of different countries. The information about them is always highly classified.
Hope you enjoyed reading this article on Aircraft Carriers

As we are aware that crew change in India is happening for more than 2 weeks, shipping owners have shown great disappointment over the ‘Being too expensive’. As per the data released by them it costs around $90k to $180K for a crew change. In local currency that is almost more than 7million Indian Rupees. […]

Product Tanker of STOLT, named as APAL –imo number 9719240, UK flag was attacked near the coast of YEMEN by armed pirates. Vessel was having armed guard team and the attack was successfully repulsed. As per the information given by the vessel, two armed speed boats approached the vessel. As Security guards fired to warn […]