Skip to content
Get to know about the marine sewage treatment plants working, types and regulations concerning the discharging of sewage in to the sea. The important details regarding this topic have been covered in detailed manner.

Regulations Regarding Sewage Discharge In to the Sea

Discharge of Sewage is governed by MARPOL Annex IV, stating that discharge of comminuted and disinfected sewage using a system approved by the Administration is permitted when:
Distance of more than 3 nautical miles from nearest land.
Sewage which is not comminuted or disinfected at a distance of more than 12 nautical miles from the nearest land.
The ship is en route and proceeding at not less than 4 knots.
The rate of discharge shall be approved by the Administration based upon standards developed by the Organization.

On board merchant vessels, many different designs have been incorporated over the years:

Sewage is separated into liquid and solid constituents, the liquid is treated with a 5 % chlorine solution for 30 minutes before discharging according to MARPOL requirements. The Solid constituent is stored till discharge at port Not practical anymore because of the sheer size needed for storage of solid constituents.

This is more like an extension of the biological type of treatment plant (discussed below) this addition saves a lot of water needed for flushing owing to the vacuum design. Liquid flows from the aeration tank to a centrifugal pump delivering the liquid under pressure through an educator mechanism and back to the same tank, thereby reducing the pressure in the system pipework to a set point which can be used to start and stop the pump.
The pipework can also be separated into different zones for isolating during maintenance requirements.
Disadvantages are eventual deposition of urea in the pipelines as well as possible vacuum collapse conditions which are difficult to troubleshoot.

Is explained below in detail.
Working of a Biological Sewage Treatment Plant
We all pray that maintenance issues pertaining to this equipment should be always minimum.
Knowing the basic operating principles not only help in extracting performance at maximum efficiency from the equipment, but also helps in troubleshooting.
Diagram explaining one of the most popular sewage treatment plants in use 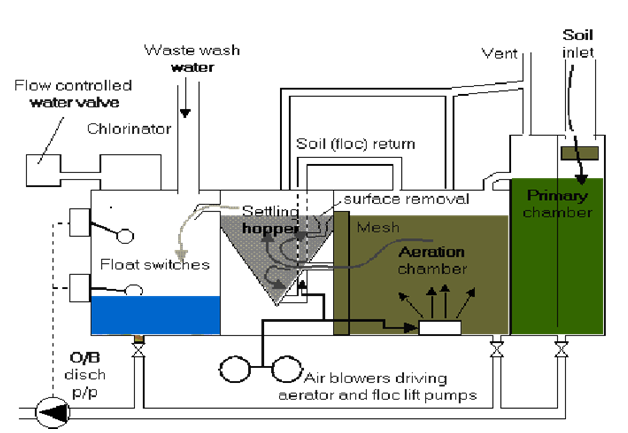 image courtesy:
marineengineering.org.uk
The most popular kind used on board is the Biological Sewage Treatment Plant Basic Principle is Digestion of Sewage by Aerobic Bacteria, so maintaining a constant supply of air is very much essential.
Often Two Fans are provided in the system for this very reason, some designs also employ the use of service air line from the regular service air supply (upto 7 bar )
The Primary Chamber serves as a collection unit for all the raw sewage.
Sewage is fed through a macerator pump, which ensures the sewage is finely ground. Increasing surface area improves Aeration effect, thereby improving efficiency of the bacteria acting.
Controlled air pressure through a diffuser of around 0.25 to 0.4 bar helps in better agitation of sewage through the air bubbles.
Settling / Hopper Chamber has conical walls to ensure particles sticking to the walls slide downwards. It has a mesh to separate improperly ground / undigested particles back to the aeration chamber through soil / floc return lines.
Clear Digested sewage floats at the top and undigested matter slides to the bottom. Undigested Sewage is mixed back with fresh sewage to ensure no anaerobic or inorganic deposits.
Anaerobic Digestion causes H2S (Hydrogen Sulphide) Ammonia and Methane which may be toxic and inflammable.
Treated Sewage then passes over to the Chlorination or Disinfection Chamber where it is disinfected with the help of chlorine. Due to modern restrictions, higher amounts of chlorine in the treated sewage are also susceptible to fines.
Some
Plants may use different methods of disinfection like Ultra Violet Radiation,
Here is a video showing typical plant in Operation
New Regulations concerning Black Water treatment have been enforced from 1st January 2010 in Circular 5 under MEPC159 (55).
All waste compounds introduced in the treatment plant involves biochemical process to be broken down thereby needing Oxygen.
E – Coli / Coliforms which are responsible for the digestion of sewage often constitutes a major contributing factor in increasing BOD.
BOD – Biochemical Oxygen Demand, limited to 25 mg/Ltr.
The value of BOD can be determined in milligrams of oxygen consumed by taking one litre of sample at 20 deg C in water kept in dark for 5 days.
The difference in dissolved oxygen between the initial measurement and the fifth day measurement represents the biochemical oxygen demand.
Some chemicals need strong oxidizing agents to be broken down and these reactions create COD – Chemical Oxygen Demand, limited to 125 mg/Ltr.
These are influenced by Total Suspended Solids in the given Sewage Sample TSS – Total Suspended Solids,
The geometric mean of total suspended solids content of the samples of effluent taken during the test period should not exceed 35 mg / litre.
Did We miss something ?
Let us know in the comments. This was all from Marine Sewage Treatment Plants, Regulations and Working.

What is Center of Gravity of Ship and how it Changes

Learn about center of gravity of ship and how does it changes when there is a movement of mass on the ship. Concept of Center of Gravity COG of an object is the point at which the whole weight of the object may be regarded as acting. If this object is suspended from COG, then it will remain balanced […]

1st May is the World Labor Day or International workers day. So, International chamber of shipping has launched a campaign worldwide knows as #heroesatseashoutout. In this ICS is urging all ships to blow their horn on 12:00 local time in their respective ports, if it is safe to do so. Many companies have joined this […]

One Reply to “Marine Sewage Treatment Plants, Regulations and Working”