Skip to content
In this article all the information related to Marpol like why it was formed and the various Annexes that fall under it have been discussed. Marpol came into the power because of the serious concern related to the Marine pollution that was affecting both aquatic and human life. Let’s read about this interesting topic in much more detail. Marpol stands for Marine Pollution and its making is clear to everybody who
is part of this industry. Marpol got its implementation in the year 1973, when it was felt that there should some law that can laid the foundation of checking the pollution taking place at sea. By the year 1978, this law was accepted by almost every country and it was successfully implemented. As we know that there
are several parts of every law that covers various aspects related to it. So here we have six different annexes that are part of this convention. So let’s discuss these annexes in detail.

ANNEX 1- POLLUTION IN SEA DUE TO OIL

This annex deals with all the aspects of sea pollution related to the oil. Oil Pollution is that major type of any undesirable event taking place at sea. Once caused, it hampers the transfer of sun light and Oxygen in to the water. Also its affects the sea lives like birds (It sticks to the feather of birds). The date of implementation of Annex 1 was 2nd October 1983.
Sometimes this happens due to carelessness of crew in the ship; there is a process in which oil and water are separated from each other, present in bilges below the engine of ship. During this process the excess waste oil is driven and saves in a holding tank and the separated water having drops of oil is pumped out in the sea. A very small amount of oil exposure in the sea is allowed, perhaps due to inappropriate systems this amount exceeds the limited value and causes leaks of oil in to the sea.

1.)    Oily water mixtures from the bilges can only be thrown in to sea once it is treated for 15PPM oil content in this water and ship should be enroute condition and 12Nautical miles away from the nearest land.
2.)    For the oil water mixtures coming from the cargo tanks, it should have oil content less than the 30 PPM and ship should be around 50 Nautical miles away from the land and should be in enroute condition. The rate of discharge in both cases need to less than 30 litters in one nautical miles.
You might also like to read: What is Enclosed Space and Precautions while entering it

ANNEX II- POLLUTION DUE TO CARRIAGE OF NOXIOUS SUBSTANCE

When tank cleaning is done in ships then this Annex come in to play.

The concentration of effluents needs to be .1% by weight. The ships should be enroute condition throwing the effluents, it should be around 12 nautical miles away from nearest land, and speed should be around 7 Knots. There are various categories of substances that come under this like X,Y,Z. The date of implementation of Annex II was 6th April 1987.

As name suggests this annex deals with pollution that is caused due to the harmful substances. In this annex Jettisoning is prohibited. The date of implementation of Annex III was 1st July 1992.

This annex deals with the pollution that is caused due to the discharge of sewage in to the sea. The date of implementation of Annex IV was 22nd September 2003.

1)      All the comminuted (Thoroughly crushed) and disinfected products can be discharged 3 Nautical miles away. 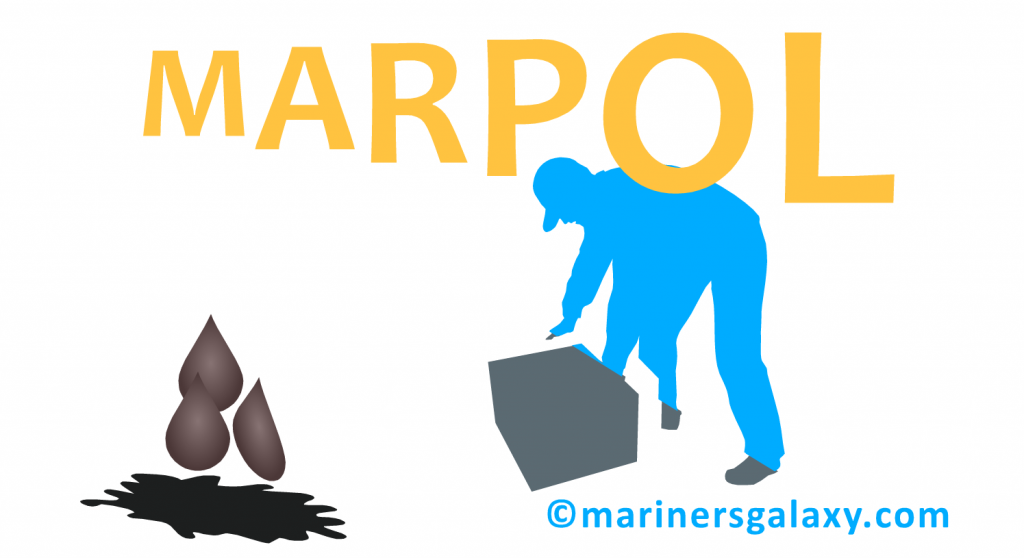 2)      Untreated sewage in the holding tanks can be discharged at a distance that is greater 12 Nautical miles away. And it should not contain any floating object.

This is a very serious issue in the sea pollution. Plastics are totally banned, but the soft plastic can be thrown but after some treatment done on it. The date of implementation of Annex V was 1st December 1988.

1)      Plastics, including synthetic ropes, synthetic fishing nets, and plastic garbage are not allowed to be thrown in to the water.
2)      Dunnage, lining and packing materials that can float needs to thrown at a distance greater 25 Nautical miles.
3)      Food wastes and all other garbage including cargo residues can be thrown at a distance of 12 nm.
4)      Garbage that has been ground or comminuted to pieces below 25mm can be thrown at distance of 3 nautical miles.

Generally nitrogen oxides and Sulphur oxides harm the ozone of earth and they need to be under the limits in the exhaust of main engine. The date of implementation of Annex VI on 19th May 2005.

Find out the reasons of various problems that may occur while engine is running like increase in exhaust temperature etc and how to troubleshoot the same with ease. Here we have discussed some of the common problem that arise when engine is running and if we follow the remedies given below, we can solve our […]

Indian Maritime University in a major move to help the students, have now shifted to online counseling. Students were anxious about when counseling will start, but now on the IMU official site they can start choosing their colleges. Earlier IMU used to call students to Chennai campus for counseling, which used to cause lot of problems for students like travelling etc. […]

COSCO and China Shipping Line Merger-All You Need To Know