Skip to content
Naval warfare is a conflict in and on the sea, the ocean, or any other major water body. From past 3,000 years, humans are involved in naval battles. With the construction of innovative warships that could independently aim heavy guns external to the hull, the number of battles have increased.
Out of all those deadly rivals, top 5 ones are:

Naval Wars In the World

Below are some of the top deadliest wars that have been fought ever:

During the middle period of first World War, this battle was fought by the British Royal Navy’s Grand Fleet under Admiral Sir John Jellicoe, against the Imperial German Navy’s High Seas Fleet under Vice-Admiral Reinhard Scheer from 31 May to 1 June 1916, off the North Sea coast of Denmark’s Jutland Peninsula. It was considered to be the largest naval battle and the only full-scale clash of warships. The war brought together the two most dominating and powerful naval forces of their time. It saw the British Navy who lost more men and ships but remained a strong tool against the German Navy. However, the two sides lost four battle-cruisers and a pre-dreadnought battleship.

The Germans claimed that it was a victorious war for them as the British navy had lost more ships and around 6,000 men in total. On the other hand, admiral Jellicoe asserted that they have won the battle as his fleet remained a powerful entity while the German’s fleet was no longer be able to withstand the war. After all the heated-up arguments there was still no conclusion about who really won the battle.

Battle of Calabria is fought during the Battle of the Mediterranean in the Second World War. It was a naval war between Italian Royal Navy (Regia Marina) and the British Royal Navy and the Royal Australian Navy. The war took place 30 miles to the east of Punta Stilo, Calabria, on 9 July 1940. Involving a considerable numbers of warships on both sides, it was one of the pitched battles fought in the Mediterranean campaign during 2nd World War.
The engagement originated from each side escorting convoys to North Africa at the same time. Some Italian’s air attack damaged many of the Royal Navy capital ships. Despite of attacks the cargo ships from both sides reached their destination and the battle later declared to be a draw. Although the Italians failed to achieve success in the battle, they did show that the Royal Navy could not function in the central Mediterranean without heavy protection.

The Battle of the River Plate was the first naval battle in the Second World War and first of Atlantic in South American waters. When war broke out in September 1939, the German pocket warship Graf Spee, headed by Hans Langsdorff, was patrolling in the Atlantic Ocean.
The 82-minute confrontation between the Graf Spee and its three smaller British opponents – Achilles, Ajax and Exeter – was uncertain. All four were damaged, with the British ships suffering 72 casualties to the Graf Spee’s 36 .In succeeding battle, HMS Exeter was brutally damaged by German navy and forced to quit because of the severe attacks made by langsdorff. 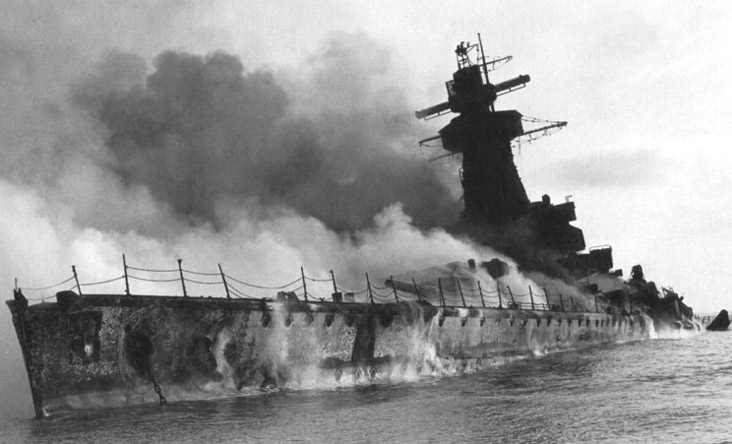 German warship’s consequent withdrawal and its dramatic abandon by its own crew , turned the Battle of the River Plate into a major British victory

Battle of Leyte Gulf was fought in waters near the Philippine islands of Leyte in October 1944, between united American and Australian forces and the Imperial Japanese Navy. It is often considered to be the largest naval battle of World War II and, possibly the largest naval battle in history because some of the most powerful ships ever built were sunk, and thousands of men dragged into the sea with them. Leyte Gulf was crucial in that it wiped out much of the remaining Japanese surface fleet while nearly ending Japan’s ability to move resources from Southeast Asia to the home islands. Japanese navy lost four aircraft carriers, six heavy and four light cruisers, three battleships and eleven destroyers, along with several hundred aircraft and over 10,500 sailors.

Some of the carriers were kept as decoys by the Japanese to divert the Americans. A series of almost nonstop surface and air clashes followed, while the U.S. Third Fleet chased the Japanese decoy. The Battle of Leyte Gulf consisted of two exploratory strikes against the Japanese forces on the way to battle and three massive actions once the fleets was trapped. The Japanese Navy had experienced its greatest loss of ships and crew ever. Its failure to dislodge the associated invaders from Leyte meant the inescapable loss of the Philippines,

It was a British naval assault of the French Navy at its base of Mers El Kébir on the coast of French Algeria in July 1940. The attack resulted in the deaths of 1,297 French servicemen, the sinking of a battleship and the destruction of five other ships. The British force consisted of the battle cruiser HMS Hood, 2 powerful battleships, and the aircraft carrier HMS Ark Royal, plus an escort of cruisers and destroyers. Despite of the estimate equivalence of force, the British had several decisive benefits. The French fleet was anchored in a narrow seaport and did not expect an attack and was also not fully prepared for battle. 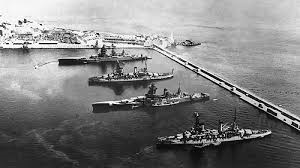 French warships were sent from Algeria as fortify, but did not reach Mers-El-Kebir in time to impact the outcome due to which French faced a serious downfall.

All images belong to their original creators and owners.

There will a lot more qualities needed for becoming a good sailor’s wife but these few qualities needed at most. I have sailed on ships with my sailor and gone through with many phrases of his life (Onboard and ashore, before and after marriage). By my Experience and also observing other supernumeraries I have penned […]

Mesmerising Ports In My History Of Sailing