CO2 flooding system is discussed in this article in details and we will discuss majorly about how we release it. CO2 flooding fire fighting system is among the common and widely used system on board. CO2 is being used because of its effective smothering action on fire and can be stored onboard in large amount.

Following are the requirements of CO2 flooding system room in which all the bottles are kept.
1) It should not be kept before the forward collision bulkhead.
2) Room should only used for storing the CO2 cylinders and nothing else than that.
3) This kind of space should be directly being accessible from the deck.
4) If the space is under deck, then there should be access by ladder or other suitable means.
5) It can only be put on deck lower than the open deck and not more deck lower than that.
6) A Mechanical ventilation should be provided at the entrance of the door.
7) The suction of the exhaust duct should be kept at the bottom, as CO2 is a heavy gas as compare to the air.
8) As per the regulation, at least 6 air changes per hour should be done in such room.

For Cargo Space: CO₂ quantity shall be suﬃcient to give a minimum volume of free gas, equal to 30% of gross volume of largest cargo space so protected.

For Machinery Space: CO₂ quantity shall be suﬃcient to give a minimum volume of free gas, equal to 40% of gross volume of machinery space so protected excluding the casing.

By regulation, 85% of the capacity must be able to be released within 2 minutes.

Co2 releasing is a sequence of events that leads to release of it. Generally it will be released in case all other fire fighting systems are not able to extinguish the fire. Master and Chief Engineer on ship should decide when to release Co2 in a space whether it is cargo hold or machinery spaces.

Releasing arrangement for machinery spaces and cargo hold is different. Generally the Co2 releasing lines for cargo holds are also used for sampling of smoke. So before releasing it, the change of 3 way valves should be change over to release of Co2.

Also for cargo holds, the number of cylinders to be released for each space is different. A larger space will have large batch of bottles that will release in to that cargo hold.

There are two release box provided on ship, one is at the fire station and other is at local location where Co2 room is there. 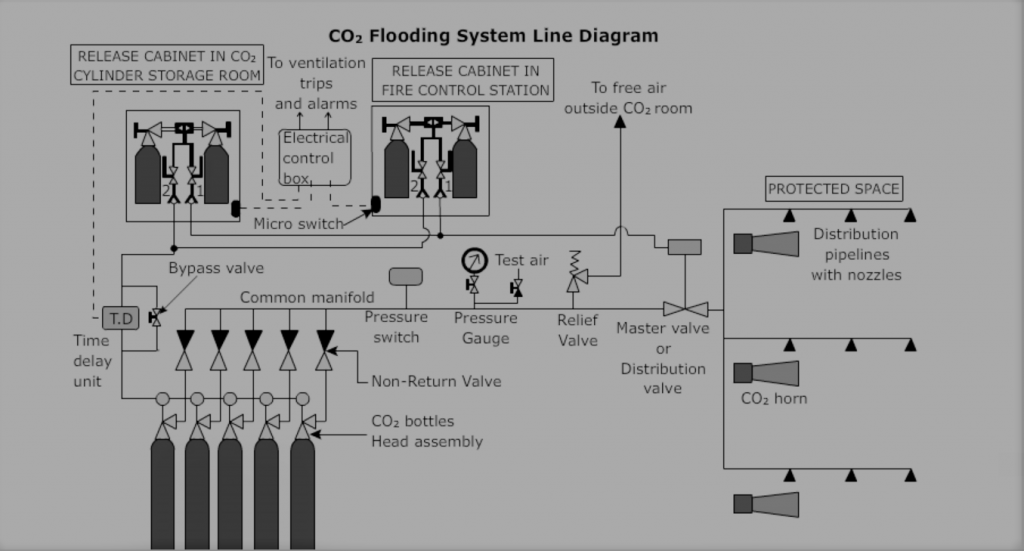 Following is the process of releasing Co2:

This was all from the article on CO2 Flooding System, hope you enjoyed reading it.

So you have made your plan to take your wife with you on ship. Let’s read about what benefits you get while doing so. The best thing about ship life is that, your partner can be part of your profession and can be with you all time. In this post we have compiled some of the benefits that you get, […]