Skip to content
A tanker ship is a type of vessel that specializes in carrying various liquid cargos like oil, chemicals etc. Due to advent of new technologies, carrying liquid products from one place to another was never been so easy. And they are little different from other ships, because they carry liquid cargo. Because since cargo carried is usually dangerous, tankers have special provisions for their safety. Generally they are categorized as Oil, Chemical and Gas tankers. Over the years, due to advent for various industries, oil being the primary one, has led to development of these ships. Earlier vessels that were made with the help of timber could not carry this type of cargo. 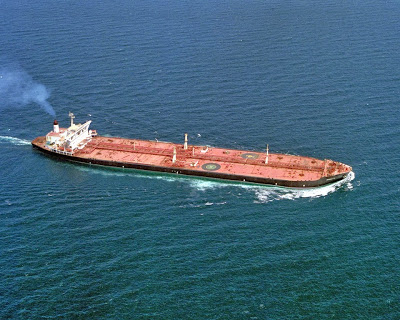 Ship owners use the tanker ships to transport these liquids from one place to another. On the other hand, they can be coastal type or inland waterways type also. Products tankers are usually are the ones that are having operating deep in to the countries, because they have pre refined and all done products. World has seen high surge in number of tanker being used all over the places. This can be attributed form the fact that, they have been a high surge in trade related to liquid products.

But handling a tanker is surely a different process as compare to other ones, reason? Well Free surface effect is such phenomenon that tends to affect the stability of the ship a lot. By free surface effect, we mean that, if liquid is kept in a closed space, but not full. Then, if there is movement along the axis, liquid will tend to move here and there. Since liquid takes lot of time to come to its original position, as compared to ship, which attains it original positions fast. Thus it creates a lag of time and liquid cargo can prove fatal, as rolling time is increased a lot. One way to rectify the same is to fill the tank full or create partitions in the cargo holds, so that free surface effect is minimized to a greater extent.
You might also like to read: How to Prepare Ships Engine for Sailing

How much is the tanker ship capacity?

Some of the common types of petroleum tankers are: Seawaymax, Panamax, Aframax and Suezmax and they have varying shapes and sizes depending upon on the drafts and length.

Suezmax: As name suggests, these are the tankers that are having their length and depth as per the Suez Canal. These types of ships can cross Suez Canal properly and are made as per that. They are usually 160,000 tones and have beam of 50m.
Aframax: Aframax carriers are around 120000 metric tons and have beam of around 32.11m. Since they are smaller in sizes, they can navigate through any type of sea. Generally they are used in Caspian Sea, black sea, and Caribbean Sea etc. AFRA means Average Freight Rate Assessment.
Panamax: They can be in between 60000 DWT to 80000 DWT. Since Panama Canal uses the lock gate type of facilities for transporting ships to other places, dimensions are per that only. Generally a ships length is around 750ft and draft can be around 12.6m.
Seawaymax: Those ships, whose sixe is as per St. Lawrence Seaway canal rocks, are the ones who are called with this name. They are generally 225.6m in length, 23.8m wide and 7.92m as draught.

Greece, Japan are some the biggest ship-owners of tankers and they have highest number of ownerships. There are other countries on the list. There are some Q-Max carriers also, those who complies with the specification of Qatar LNG terminals.

7th Annual European Bunker Fuel Conference was at Rotterdam. This conference was very important as it discusses the matters related to bunkers. As every day, concerns over rising fuel prices is increasing, shipping industry is on constant talk, as how to deal with this price hike, regulations and how to cope up with these. 7th Annual European Bunker Fuel […]

Crankcase Inspection on Ship: Must Read

2 Replies to “Tanker Ship-Things you should know about them”