Learn about marine centrifugal purifiers working, theory related to their working and about the new ALCAP principal that is used nowadays. Purifiers are one of the most essential machinery on board. Being high precision equipment, it becomes very important to be well versed with the principles of operations. Purifiers are often attributed to cause sleepless nights to 4th engineers.

This diagram gives a general overview of the purifier / centrifugal separator unit. 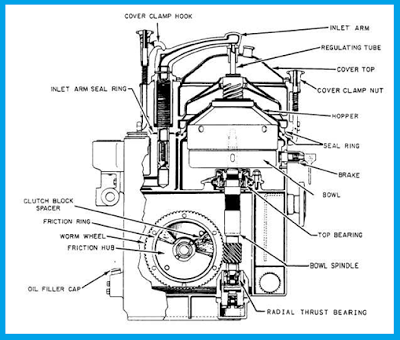 Theory Behind The Centrifugal Purifiers

Basically, a purifier separates water from oil. But isn’t that also done in Settling Tanks ?

Yes, but as we can see the separation efficiency depends upon difference in densities, particle size as well as ‘g’.
This principle is used in Settling Tanks. If we replace the ‘g’ with ‘ω’ , in case of centrifugal separation, the time required for separation drastically reduces as ‘ω’ is a lot greater than ‘g’ ( ‘g’ being acceleration due to gravity, a quantity we cannot change willingly. ‘ω’ being Angular velocity, a quantity
we can alter ) 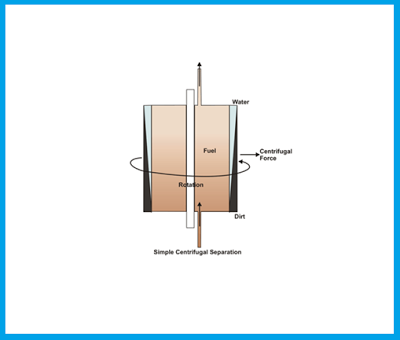 Image
Courtesy : Marinediesels.info
A bowl containing impure fuel is rotated, the centrifugal force developed exerts a force on all particles in the fuel. The heavy particles like solids and water are thrown to the periphery of the bowl ( m ω2, angular velocity being constant, denser particles having more ‘mass’ experience more Force of Separation ) 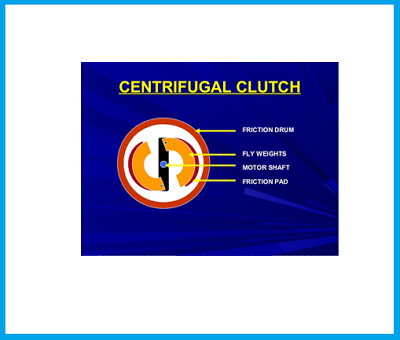 Image
courtesy :  slideshare.net
Earlier, the design incorporated was called tubular stack purifiers, they needed very high RPM for obtaining better separation, as the Force was not enough to throw the particles all the way to the periphery ( therefore more angular velocity required )
Modern marine centrifugal purifiers have eliminated the need for very high RPM by incorporating bowl shaped discs stacked on top of each other……..continued

Concept of Interface and Gravity Disc In Centrifugal Purifiers

Motion of fluid between two plates varies between the maximum at mid point and minimum approaching the plates.  A particle entering into the plates will tend to be pushed upwards by the fluid flow.
All the time centrifugal force tends to retard the horizontal component of the movement causing the particle to approach the underside of the top disc, velocity reduces as it approaches. The centrifugal force eventually overcomes the force acting on the particle due to fluid movement and the particle starts to move towards the outer rim 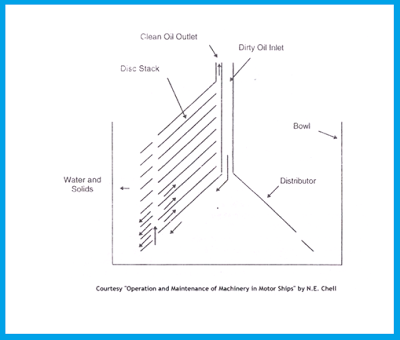 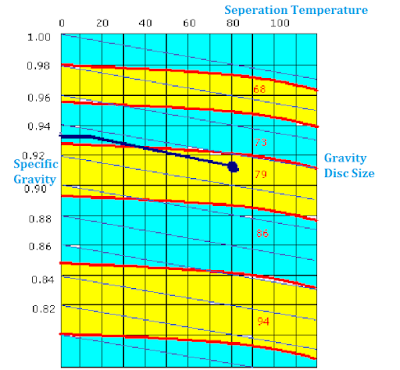 Image
Courtesy : marineengineering.org.uk
Selection of Gravity Discs is very important for better purification; this graph called a Nomogram is used to ascertain the best possible gravity disc for given specific gravity and difference in separation temperatures
The gravity disc with the largest possible central bore diameter should be selected which not cause overflows. Reducing the flow rate to a purifier also increases the quality of the output.
General
Arrangement for Purifiers on board is given in the diagram 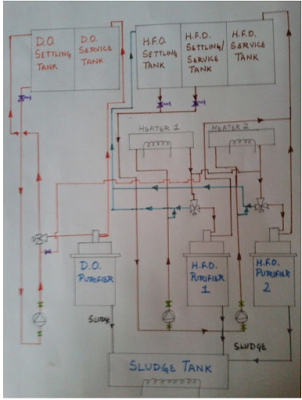 The Purification and De-sludging Operation Of Purifiers

Earlier, manual purifiers used to be stopped after a few hours of ‘batch operation’ and periodically cleaned. Desludging process can be manually operated or automatically timed depending upon the Manufacturer.
Self Cleaning marine centrifugal Purifiers are able to slide open the bowl and discharge accumulated sludge and water through discharge ports and close. Depending upon the time for which the bowl is kept open, the process is known as partial or total discharge.
In total discharge method, more clean oil is wasted
In partial discharge method, clean oil can be saved.
There is stationary centripetal pump (also called an oil paring disc), an impeller mounted on the light phase outlet (discharge – clean oil ). A discharge valve throttles the back pressure in the bowl, by changing the immersion depth of the lip of the impeller, which helps removes air from the light phase delivery chamber. This reduces chances of foaming. 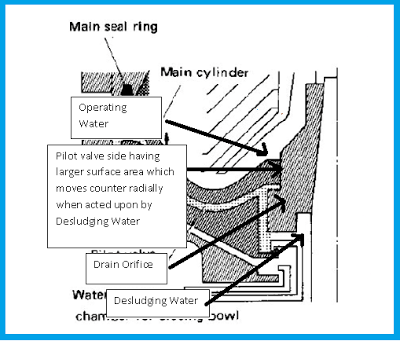 Image
Courtesy : hfoplant.blogspot.com
During purification, centrifugal force acts on pilot valve therefore packing remains sealed, operating water remains filled in the chamber and bowl is kept pushed upwards to main sealing ring. Due to constant loss of water (evaporation) operating water is replenished by ‘make up
water’ or ‘replenishing water’.
For Desludging, bowl has to slide open, supply of operating water is stopped. ‘Desludging water’ is supplied which acts on the lower surface of the pilot valve having a larger surface area, thereby opening the Pilot Valve to the counter radial direction (opposite to centrifugal force).
This causes all the operating water to drain from the drain orifice which is normally kept closed by the pilot valve. The bowl slides down and accumulated sludge and water at the bowl periphery is thrown out. The desludging water is stopped and operating water is simultaneously started to fill the water chamber. Causing the bowl to lift and again return to normal working position.
And the pilot valve also looses water pressure which was forcing it to remain open in counter radial direction. Therefore the drain orifice is also closed by the pilot valve. This completes the Desludging operation.
Water is distributed by a water paring disc. Water sequence and timing are controlled by Solenoid Valves. Water from the Hydrophore or in some cases, Header tanks are used. 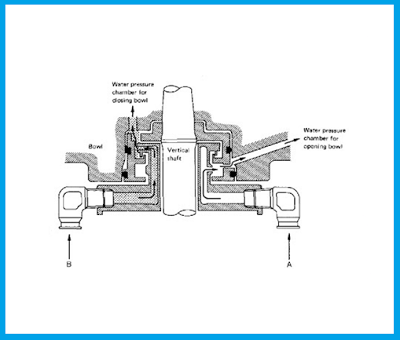 Diagram
Source : hfoplant.blogspot.com
The difference between partial and total discharge operations of Mitsubishi Self ejector series is only the time duration for which the bowl remains opened. This is achieved by supplying desludging water for shorter time duration.
In case of Alfa Laval Purifiers, Valve Springs are used instead of Pilot Valves.

Alpha Laval ALCAP design in marine centrifugal purifiers claims it can purify high density residual fuels.
Its flow control disc eliminates the need to change gravity discs based on differing fuel densities.
It used Transducers to detect water in oil side and oil in water side and thereby signaling the microprocessor to desludge automatically upon detecting changes in the interface.

Image
Source : seperationequipment.com
Hopefully this helps in understanding the principles of operations involved in Purifiers Centrifugal Separators. Did we miss something ? Let us know in the Comments !

USS Portland tested its high-energy laser weapon system by shooting laser at a drone and putting it down. This was Navy first of kinds testing of such setup and one step more into the development of such more complex and high power weapons. An unmanned vehicle was made target by laser system. Such tests give […]

Why Maritime Piracy Is a Good Thing for Shipping

No, Piracy is not a “GOOD” thing for shipping industry. We changed the title so that you can know about how grim the situation of maritime piracy is and why it is the worst thing happened to the shipping sector. Latest Orkim Harmony Piracy activity again raised the question on the maritime safety. Why Maritime Piracy is Worse […]