It is mandatory to have such markings and they are 25 mm thick. They can of color white or black depending on the side playing color of the ship.

Load Line and tonnage marks- All about it

Below is the diagram about the load line and you should first see this, before going for the theoretical part of it. 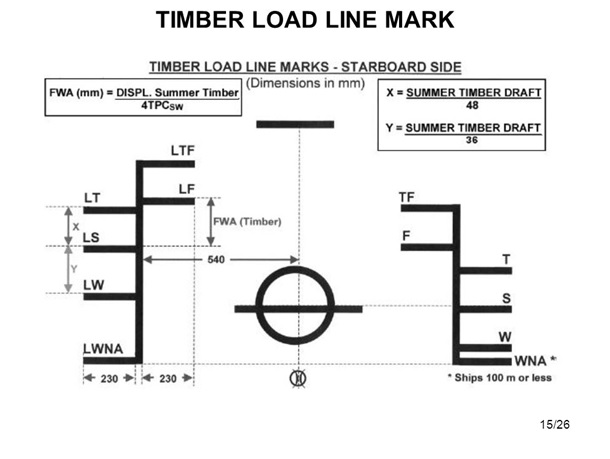 Load Line Disc: You can see this line is placed directly below the deck line and also called as ‘plimsol mark’. It gives us the summer freeboard by measure from the tip of deck line to the centerline of the disc.

Draft Lines: These are the lines which will show us as how much the ship can be loaded in different waters. Around 540 mm right side of the load line disc, we draw a vertical line. Now we understand the meaning of each horizontal lines.
Read: Naval Architecture terms and terminology

S- This one is exactly in center of the load line disc.

TF – This is the top most line and indicates as maximum to which ship can be loaded if it is in tropical fresh water.

T- This shows maximum loaded point for Tropical Sea Water. It is around 1/48th of the summer draft above the summer load line.

F- This is the load line for the fresh water and if ship moves, then it has to limit her loading till here. It is calculated by dividing displacement by 4 times the T which is tones per centimeters.

WNA- Winter Atlantic North Line is dedicated to North Atlantic and ships that are less than 100 meters in length. It is placed 50mm below the winter line.

Note: All these lines are 240 mm in length horizontally

Tonnage marks are totally different than the load lines and they should not be used for indication of drafts and other purposes. But then question arises what is tonnage mark? Well let’s first see the tonnage mark given below.

Till the time water is below the tonnage mark, a modified tonnage is applicable for such ship. The center of the point where triangle tip touches the tonnage line is situated 540 mm forward of the load line disc. For ships that carry timber, it will 1080mm away.

These lines are used for ships that carry timber as cargo. They will be made just along with regular or ordinary load line. It is located 540 mm abaft the load line disc. Here is the diagram of such lines:

LS- This is upper than the summer load line. And ship should have this, if all the cargo on deck is lost at sea or offloaded.

LT- This is upper than the summer timber load line of about 1/48th mm of the summer draft.

LWNA- North Atlantic Load Line is for ships moving in such areas. There are two variants of it. Ship with length more than 100 will have this in same level as W load line. If length is below 100 it will be placed at same as WNA load line.

LF and LTF are load line for freshwater and tropical freshwater. They are kept little high than LS and LT line.