Whether it is to be termed as new ‘LOW OF COST CUTTING’ or another way to insult seafarers, but one of the company shore staff told people on some ships to make mask from torn bed sheets! As we know that at least seafarers need N 95 masks. They are at the frontline (well in the front) and providing basic PPE is the responsibility of shore staff ( Read Company). Below is the email proof of such communication that was made by the shore staff of a company. But this is not the first time shipping companies have gone very so low in terms of cost cutting. One of the leading container shipping companies (not to be named) asked their employees to use old boiler suits and shoes and other items till they get completely torn.
We do understand the fact that misuse of things should be avoided, which is fair enough. But in most of the cases, staff on ship does not have proper PPE. Sometimes they have to use things left by the previous crew. There have been cases in the ships where people paint in high mist area, without any face mask to protect themselves from the fumes. 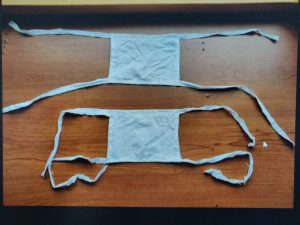 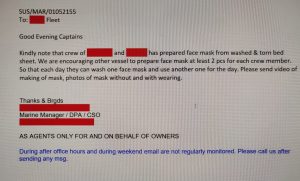 Ever ACE, with container capacity of 23992 teu, has been in the news on her maiden voyage around the globe. She berthed at Felixstowe where locals were able to see the sight of world largest ship. Felixstowe have in past also saw MSC Gulsun coming on to her maiden voyage (being largest at that time). […]