Skip to content
Learn about center of gravity of ship and how does it changes when there is a movement of mass on the ship.

Concept of Center of Gravity

COG of an object is the point at which the whole weight of the object may be regarded as acting. If this object is suspended from COG, then it will remain balanced and will not tilt. Just imagine those non falling inflatable dolls that never fall even if you punch them. Because the COG is concentrated at the very bottom, so object has high tendency to come back to its original position.
Read this interesting article:what is free surface and how we can tackle the same 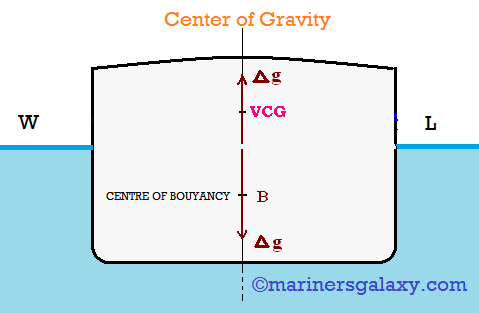 The distance of the COG from any axis is the total moment of force about that axis divided by the total force. Force is represented by weight as the body may be made of different Material
MOMENT OF WEIGHT ABOUT AXIS C.G. from axis =
…………………………………………………………………

TOTAL WEIGHT MOMENT OF MASS ABOUT AXIS C.G. from axis =

Shift in Position of C.G. Due to Addition of Mass

When a mass is added to a ship, the COG of ship moves towards the position of the added mass. The actual distance moved by the center of gravity depends upon
ü The magnitude of the added mass.
ü The distance of mass from the ship’s center of gravity.
ü  Displacement of ship.
Read this article: movies based on maritime world
For example: if a mass is placed on port side of the ship in the forecastle, the C.G. will move forward, upwards & to the port. When a mass which is already on board ship is moved in any direction, there is a corresponding movement in the center of gravity of the ship in the same direction.

Shift in C.G Due to Movement of Mass

Effect of Suspended Mass on Ship’s Stability or C.G

The position of the COG of a hanging mass, relative to ship is always at the point of suspension irrespective of the heeling movement of the ship. 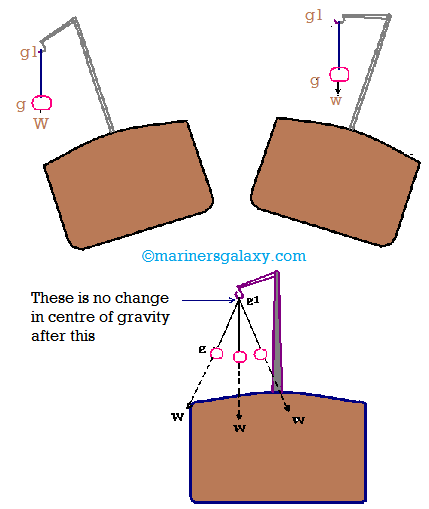 For Example: When a mass lying on the Deck is being discharged by a derrick, as soon as the mass is clear of the Deck, its center of gravity is raised to the derrick or crane head, thus causing the equivalent rise in the center of gravity of the ship. If the mass is advance raised to the extreme height, which is to the crane or derrick head, there will be no further change in the COG of ship.
So this was all from this article related to COG and how it can change.

AP Moller-Maersk Line is a big business house that deals in four diversified business- Oil, Maersk Line, Maersk Drilling and APM Terminals.  Following are the questions that were asked during a recent interview. But Before that, they took Maersk LI and PI test . So do check out article on that also.  AP Moller has a very standard […]