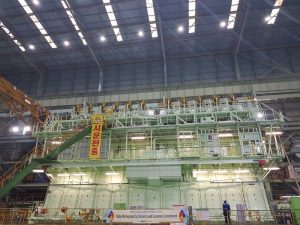 Hong Kong port has made changes to their crew change rules. Now crew members can easily sign on and sign off from the Port city without restrictions. The new rules have been in force from last night, thus relieving lot of seafarers who wants to sign off or sign on. As per the rules, seafarers […]

The shipping giant, AP Moller Maersk, which is keen on becoming carbon neutral, is expanding its investment in the same to cut down the emissions. As per the reports, company will be putting Air Lubrication System on one of its ship. If you hear the industry experts, this system tends to give around 10% reduction […]

MV Evolution- Bulk Carrier (Liberian Flag) was abandoned by its owners when US authorities detained the ship in Charleston. For four months crew was not paid for their work and they are stuck on ship. Out 21 crew, 19 are Filipinos, 1 Jordanian and 1 Lebanese. The vessel was sold to a new owner so […]