Skip to content
Governor of engine is a piece of instrument and an integral part of engine working system. Well the main function of a Governor is to control the speed or RPM of the engine in a control manner. What happens is that when load on engines changes, engine tends to accelerate or decelerate. During increase in load, RPM of the Engine decreases and it leads to slowing of engine. Now in this case Governor in order to maintain the speed, increases fuel supply to engine, so that speed can be attained to the desired value. But when load on engine decreases, then it tends speed up and in this case Governor reduces the supply of fuel to maintain the desired RPM.Now how to regulate this fuel supply is dependent on what type of governor we are using. Earlier we were using Mechanical governors, but nowadays we have replaced them with hydraulic and electronics because of the simple reason that they are more accurate then the mechanical governor. So, let’s discuss about these governors in details.

What is a Mechanical Governor of engine and how it works

A pictorial representation of how a mechanical governor looks is given. Mechanical type of governor takes drive directly from the engine. There are two balls fitted on the main spindle and they are free to move radially. A sleeve is fitted at the bottom of these balls and it can move up and down as per the movement of balls of governor. Attached to this sleeve is a fuel regulating valve that moves according to the movement of sleeve. 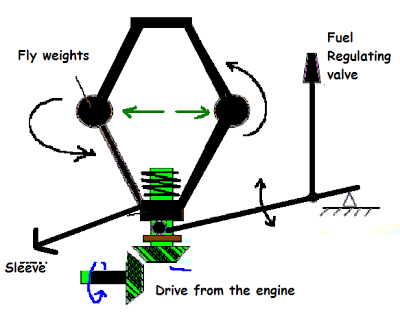 What is a Hydraulic Governor of engine and how it works

One of the main disadvantages of mechanical type of governor is that the friction forces acting in the mechanical joints are responsible for delay in response. This anomaly is replaced in the hydraulic governor. All though the whole system of mechanical governor is present in hydraulic governor also, but the response to the fuel valve through governor is provided with the help of oil. An arrangement of piston and barrel is made and this piston is directly attached to the sleeve of the governor.
Now according to the movement of the sleeve, piston pushes the oil forward and backward. But this is just a simple system. Nowadays lot of machines and equipments are fitted with this hydraulic governor, so as to make it them more reliable and accurate. Servo motors are there which are now being used in conjunction with the hydraulic governor.

What is an electric Governor of engine and how it works

Diagram of electric generator is given below

Most reliable and accurate governor is electric governor. It
consists of rectifier, controllers, and Amplifiers. Now the thing is that an
alternator is fitted on the cam shaft of the engine. Due to revolving motion of
cam shaft a certain amount of Alternating current is developed. This
Alternating current is fed to the rectifiers that convert this current in to
Direct Current. A controlling and amplifying unit is there which senses this
signal and matches it with the set value of the engine RPM. It generates signal
as per the need like whether to increases the fuel supply or decrease the fuel
supply. The output of this control unit is feed in to a High speed alternator
which controls the fuel valve.

Watch: Video Of NEW Ship being launched in Dock

See this compilation of awesome video of ship launching in dock. Read these other interesting article as well on Sailors Life