This article discusses about the different parts or components that are present in a boiler. In this article we will get to know about each every component that is fitted inside the boiler. For example, super heater is the part of boiler that is used to generate superheated steam. Let’s discuss these parts in detail.

Different components or parts of a boiler 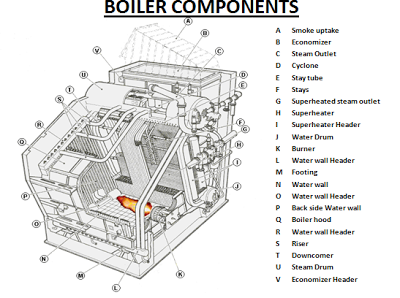 Earlie the drum of boilers were used to be made from riveting method, but now with advancement in the welding technology, drums are made with welding. And all this type of work is done in guidance of different classifications society and the welded piece are tested for their strength by using various tests.
The whole making of steam drum employed using four plates namely: two dished end plates, a thick wall tube plate (thicker to accommodate the drilled holes for inserting tubes) and completed with a thinner wrapper plate. Now in order to weld all plates together we use the welding method to accomplish the same. Since we know that we need to carry put tests on the plates in order to see test their strength, during welding some tests plates are also welded longitudinally. This in turn helps us to measure the strength of the welded joint. Generally we should have the strength of the welded part to be more then the parent metal. All this type of welding does not involve human effort and only sues the automatic machine to accomplish the same.
TYPES OF BOILER USED ON SHIPS
Generally we do non-destructive testing– such as x-ray photography and this gives the result regarding the worthiness of the weld. If any fault comes in the way then it is rectified as soon as possible.
In order to test the boiler against the leakage, we use the hydraulic testing and by this we are able to check any type of leakage occurring in the steam drum. The space above the water line acts as reserve steam space needed to maintain plant stability and helps in separation of the steam and water emulsions formed in the water walls and the generating tubes. It is usual that water will be getting carried away in the steam, so in order to separate the same; we have the perforated steam plate which separates the water from steam.

If we see the working of headers, then we won’t find any difference between the working of water drum and the headers. Yes but they do working on a small scale. That is the reason why in some modern boilers, the headers have replaced the water drum. The same of these can be in square, round etc.

These tubes are the main tube that come in contact of the flue gases and transmits heat to the water. Although they are not found in the modern boilers as they have replaced by the economizer tubes, but still they are used in many boilers.

Screen tubes are also like generating tubes, but they have much more diameter. The main purpose of using the screen tubes is to protect the super heater tubes from unwanted heat. The reason for this is that steam latent heat of vaporization is very poor and it cannot take more heat away as this is already a steam only.
In order to increase the insulation of boilers, we use the water wall tubes. In water wall tubes, water flows and takes away the heat surrounding it. Thus the heat inside the boiler does not get transmitted to the outside of the boiler. These are of three designs namely: water cooled with refractory covered studded tubes; Close pitched exposed tubes and membrane Wall.

Down comers and Riser tubes

Super heater tubes as name suggests are sued to generate steam of superheated quality. Generally they are protected by screen tubes. The reason for this has been shown with the yellow color above.