This article deals in explaining the waste heat recovery system that is being used in large number of vessels these days, considering the benefits it is giving to the ship owners and also reducing the carbon footprints.

Consider a situation in which the only fuel that you need to burn on ship is for main engine, and not for any other machinery like Generator, Boilers. Sounds little amazing right? But seems little impossible! Well now we have systems on ships that can make that happen. That is where the Waste Heat Recovery system come under play. Although it is a complex arrangement to understand, but the picture below explains it in a very simple manner.

Here is the point wise explanation of this: 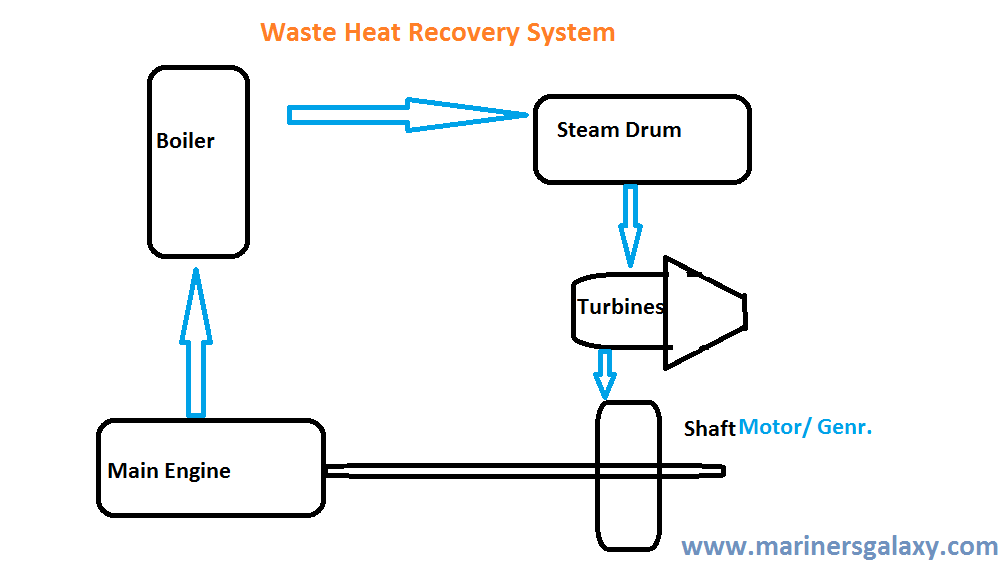 This system also has shaft generator and motor combination. It acts as generator when steam turbine is not generating enough electricity as per the consumers. And acts as motor when there is excess of electricity produced by the turbine. When it acts as motor, it helps the shaft of the engine to turn, thus reducing load on engine and less fuel consumption. WHR is a very intelligent system which works together. And the kind of efficiency the system has is really good. Single power and steam turbine can produce so much of electricity that it can be fed to several villages, if the setup was on land.

But to make it run, you need additional pumps, condensers, regulators and other more things. Let’s see some more info about these systems

Over the years the popularity of using the waste heat recovery systems has grown a lot. Major shipping players like Maersk, MSC etc have WHR systems in most of their vessels. With pressure increasing on shipping sector for reducing the carbon footprints, these systems are greatly helping it to cut down. On the other hand, it is also cutting down the running cost of ships as less fuel oil is burned, which accounts for most part of money involved in running the ship.

Marine engineering as a career, Job Scope and Salary

What are the Different Components or Parts of a Boiler

This article discusses about the different parts or components that are present in a boiler. In this article we will get to know about each every component that is fitted inside the boiler. For example, super heater is the part of boiler that is used to generate superheated steam. Let’s discuss these parts in detail. Different components or parts […]

One Reply to “Waste Heat Recovery System On Ships”