Skip to content
In this post I have discussed about how classification of marine boilers are done. In the last what are the uses of steam on board ship has also been discussed in this article and they should be known to the cadets.
The main idea is to make to study basics of boilers in order to have an idea about the boilers that are used on ship. If you have any suggestions or comments to say, please drop a reply below.

Boilers may be classified according to the following:-
1)     Smoke tube or water tube- We will discuss them in detail in the next article. Boilers are generally classified in these two. For brief knowledge, smoke tube boilers are those boilers in which smoke travels inside the tubes and in the water tube boilers, the water flows inside the boiler tubes. Read this article to know about boiler mountings
2) Internally or externally fired- For boilers using burners are internally fired, while those using coal are externally fired. Generally on ships, we use internally fired boilers, but in earlier times we used to make steam with the help of coal.
High pressure or low pressure- Tankers ships uses the high pressure boilers.
Natural or forced circulation of water- Ship normally uses the forced circulation of water.
5) Stationary, Marine or Locomotive- Stationary boilers are used in wide scales in the power plant for generation of electricity. The steam generation through these boilers is used to turn the steam turbine and the steam turbine in turn produces the electricity.
6) 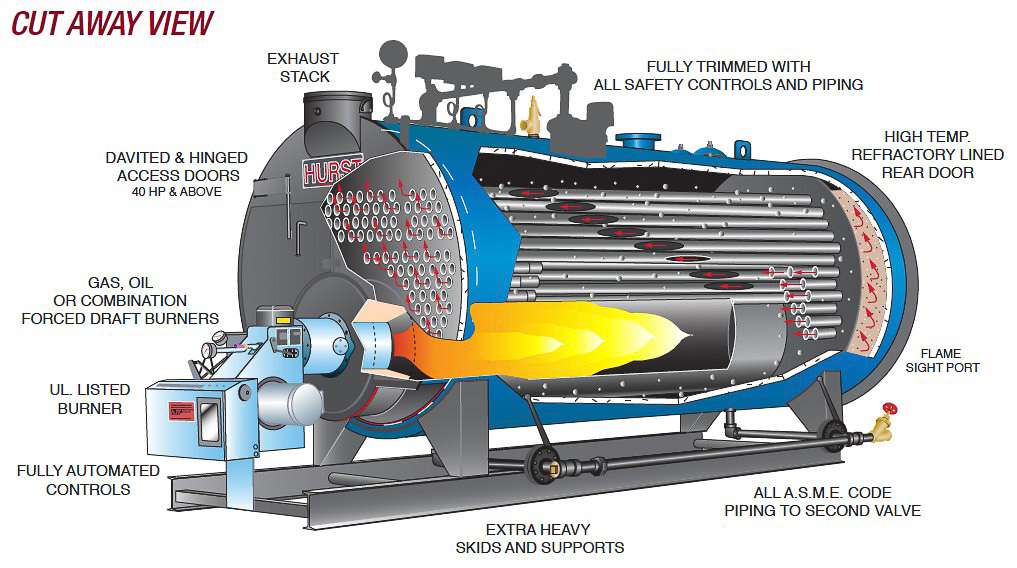 No. of drums – single / multi-drum- Normally the marine boilers that are used on board ships are twin drums type.
7) Gas flow – single or multi pass – Generally we use multi pass system in order to increases the transfer of heat. The main idea is to make gas give its all heat to the water and hence the efficiency of the boiler is increased.
Natural / forced draught- On ships we generally use the forced draught fans.
Heat source – solid / liquid / gas / nuclear / waste gas- If we talk about marine boiler heat source that is being used on ships, then liquid and waste gas come in to the use. In steam ships, we use the liquid diesel oil for firing the boiler. But in ships (Diesel engine driven) the waste heat of main engine is used and hence it increases the overall efficiency of the engine as we are using the heat of the gas that otherwise gone waste in to atmosphere.
10)  Single or dual evaporation- There are some boilers that use double evaporation. In this steam generated in one part is used to heat the water of second drum. Although loses are there, but the chances of steam getting affected by any leakage from the machinery spaces are very less.
So this was all in the classification section, now let’s move to the uses of steam on ships.

Uses of steam on ships

1) For propulsion uses to drive the steam ships.
2) For electric power generation on steam and few motor ships.
3) Used to drive the cargo pumps in tankers ships to transfer the oil.
4) Winch and windlass are also driven by steam in some ships like tankers.
5) For operation of cargo oil pump on most oil tankers.
6) On steam ships, this steam is used for taking or making vacuum inside the condensers.
7) The stripper pumps are driven by the steam ships. For cargo heating on both steam and motor tankers.
9) For warming up the engine in cold areas and prior to starting.
10)  For operation of ships whistle on all steam ships and few oil tankers.
11)  Fuel oil like heavy oil and the lubrication oil in some cases are heated with the help of steam.
12)  Sea chest is blown through with help of steam.
13)  One major use of steam on board ship is to soot blow on most ships.
14)  Derrick on some ships is driven with the help of steam only.
15)  Heating of the accommodation in colder seasons.

Types of Engine Lubrication and Uses

In internal combustion engines or any machinery that involves moving parts, it needs lubrication for the basic reason that it will avoid wear and tear in between moving parts. In shipping where the size of the engines is huge, lubrication requirements are specific and much important. On board ship mainly lubrication is needed for main engines in large scale, […]

Life as a Marine Engineer- My Thoughts

Being a Marine Engineer is very much a rewarding career if you are willing to put up with the difficulties! Of course, the life onboard can be vastly different depending on the vessel you sail on (try comparing the life on a North Sea supply boat to one of the largest cruise ships) but they […]

Find out the reasons of various problems that may occur while engine is running like increase in exhaust temperature etc and how to troubleshoot the same with ease. Here we have discussed some of the common problem that arise when engine is running and if we follow the remedies given below, we can solve our […]