Skip to content
Suez Canal which is a gateway to European waters from Middle East waters, is all set to for commercial usage from 6th August. For past years, Suez Canal authorities are busy in expanding the canal, so that in future more ships can ply through it, thus increasing the size of fleet that passed through it.

Suez Canal is a main source of income for Egypt. In this canal is preferred by the ship owners as it shortens the distance. You can see
this in the picture below. 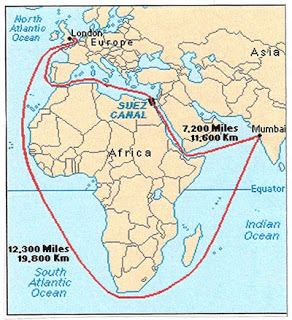 As per the expansion plan, a total distance of 25 Km of canal will be expanded. In this the width will be increased and the depth will be made to 25 meters. Thus now ships up to more than, 20 m can safely pass through it. Earlier it was not possible to do so.
Read about this interesting articles: Ship Breaking In World
As per the official reports, around 250 million cubic meters of sand is to be removed to make this expansion possible. Around 38 dredgers are working night and day to make the project completed on the time.
Read this also: World Largest ports that handles most cargo
Economist estimates that, this expansion, Suez Canal will add around 15 billion USD to the income of Egypt.
The new Canal is was opened on the 6th of  August 2015.

International Seafarer Day will be celebrated all around the globe on 25th June. This is a day which remembers and salutes the efforts that every seafarer goes through to make this industry keep going. International Maritime Organization has dedicated 25th June as the world seafarer’s day and to celebrate this day; all over the world programs and events are organized. Seafarers […]