Stresses on ship have been discussed here. A ship like other objects is subjected to both stress and strain, and since the size of the ship is large, they serve a great importance. Ship is subject to stress and strain because loading, buoyancy, weather and machinery. All of them have different effect on ship structure. It should have strength to bear these stresses and also to resist them.

Types of Stress on Ship

There are two kind of stress:

4)     Shearing
Tensile stress is usually the one which tries to rip apart the structure or you can say it tries to pull it. While compressive stress are reverse of it, and tends to buckle the ship. Bending stresses to bend the whole structure just like you do bend your back. Shearing forces are the ones which shears the material. For twisting forces that develop when you spin your body and then try to stop it suddenly.
Stresses on a ship are generally divided in classes which are called as Structural or Local. We will discuss each of them in detail.

Structural Stresses on a ship

Hogging and sagging are generally related to how the ships have been loaded. If she has been loaded more at the ends and lesser at amidship it will hog. Sagging on the other hand is when the loading is more on amidships. Diagram below shows such condition. Both of them are longitudinal stresses. And they are greatest at amidship and bottom. Ships that are longer usually have a high shear stress at the neutral axis. To prevent such stresses, ship is provided with more strengthen members at the half depth of the ship.

Racking stress on the other hand is caused on the side of the ship as shown in the diagram below. Therefore the side plating and bottom plating should be strong enough to bear them. Transverse bulkheads usually give strength against such stresses and prevent ship from racking stresses. Water pressure as we know will try to push the plates inside. Frames will help a lot from such pressure.
When ships goes to dry-dock, ship bottom is subjected to various stresses as ship is no more floating. The bottom is resting on the wooden supports. But the whole bottom does not. This makes the bilges to sag.
Read this: Ship struggling in rough whether
On the other hand vibrations causes strain in the ship structure and such is avoided by strengthening the cellular structure below the engine.

There are two kinds of local stresses on ship which are named as panting and pounding.

Panting– This is the inward and outward movement of ship platting at the bow. This is causes by the water pressure caused by the continuous waves coming and touches bow of the ship. 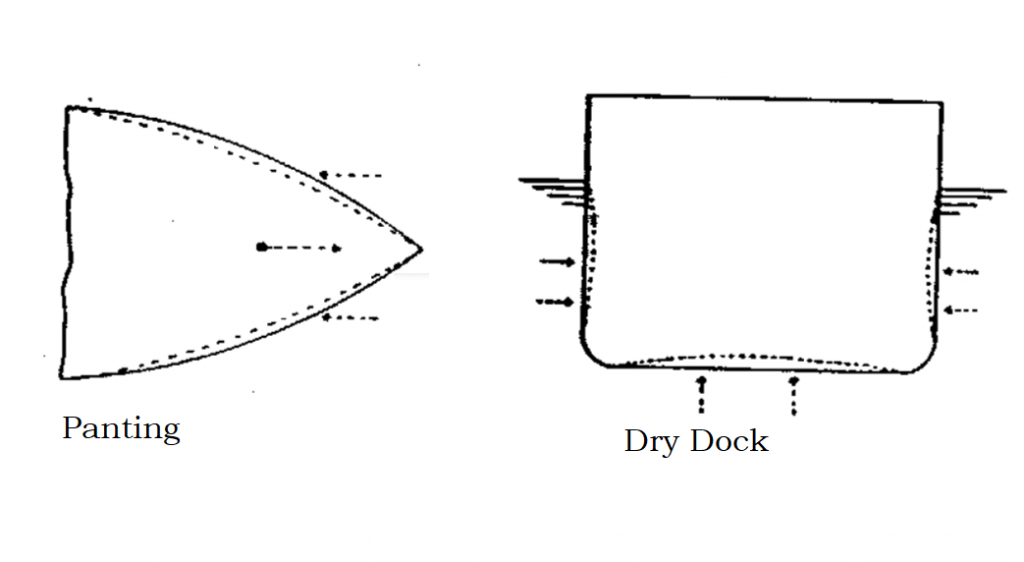 Pounding– This kind of stress comes in play when the ship is pitching. Since during such event, the bow lifts and gets clear of the water. And then again strikes the water. Due to this large forces acts on the bow and can damage with bow, if the pitching is too much. That is the reason why the bow is made in such a way that it has strengthened plating around the bow.

As a project, world’s first commercial ship that is being pulled by a kite sailed across the Atlantic. Name of the vessel is MV Beluga SkySails and sailed from Germany to Venezuela in maiden trip. The project was launched in the year 2008. The idea is that a big computer controlled Kite will fly 200m […]

First of five- 31 type frigate, HMS Venturer had its first steel cut recently. Ceremony of first steel cut took place at Babcock’s factory in Rosyth, Scotland. These new type of frigates will add more power to the surface combat capability of Royal Navy. The good things are not only limited to UK Naval forces […]

Watertight Bulkheads: All you need to know

Watertight Bulkhead is an integral part of the modern ship construction and serves as a strengthening member. It is to be noted that it also gives protection to the ship from any kind of fire or grounding. It won’t let the other compartment fill in case grounding takes places in one part. To simplify this, […]