Skip to content
Find out the reasons of various problems that may occur while engine is running like increase in exhaust temperature etc and how to troubleshoot the same with ease. Here we have discussed some of the common problem that arise when engine is running and if we follow the remedies given below, we can solve our problem. Let’s have a look at them one by one.

Exhaust temperature of all cylinders increasing

1)    Cause : Increased air temperature due to fouled air cooler.
Remedy : Keep fuel control such that exhaust temperatures are within permissible limits. Clean air cooler at first available opportunity.
2)  Cause : Fouling of air and gas passages of turbocharger.
Remedy : Carry out air side water washing of turbocharger. To carry out turbine side water washing reduce engine as recommended by makers.
3)  Cause : Change in combustion characteristics of fuel in use.
Remedy : Keep temperatures within limit and inform office so that matter can be taken up with bunker supplier.
Read This Interesting Article: Why Engine is not starting, What could be the reason?

1)   Cause : Fuel valve is defective.
Remedy : Replace fuel valve with spare overhauled one. Dismantle removed injector and overhaul it. 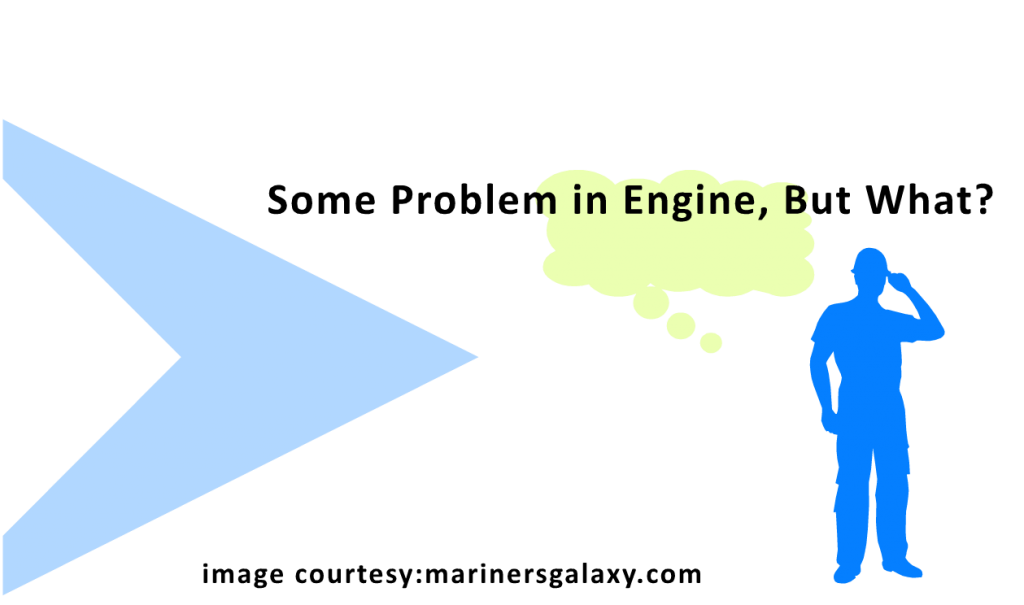 Cause : Exhaust valve is leaking.
Remedy : Replace defective exhaust valve and overhaul it.
3)   Cause : Blow- by causing leaky combustion chamber. (This may be indicated by hissing sound heard when scavenge drain valve is opened. Depending on condition of rings smoke or sparks may also issue from drain. Remedy : Inspect rings from scavenge ports and replace if faulty, at first suitable opportunity.

Exhaust temperature of all cylinders decreases

1)   Cause : Air or vapour lock in fuel pump and
fuel valve Remedy : Purge air/vapour from fuel pump and/or fuel valve.
If this does not help injector may have to be replaced, with spare overhauled one. If it has sticking valve spindle or broken spring of needle valve then it can result in air lock in fuel injector.
Dismantle removed injector and overhaul it.
2)  Cause : Suction valve of valve controlled fuel pump is defective.
Remedy : Overhaul suction valve of fuel pump.
3)  Cause : Plunger of jerk type fuel pump is sticking or leaking.
Remedy : Replace fuel pump with spare overhauled one.        Note : Sticking of fuel pump plunger can take place while changing over to heavy oil from diesel oil, if heating is not gradual and uniform. A worn out helical edge of plunger can result in late injection and consequent increase in exhaust temperature.

4)     Scavenge fire Cause and Remedy

Remedy : If fire is small then reduce engine speed to ‘Dead Slow’, increase cylinder lubrication and keep away from relief valves of scavenge manifold and crankcase. Fire may die down on its own. Increase engine speed gradually with constant watch on it. If fire does not re-ignite then clean scavenge spaces at first opportunity and inspect condition of piston rings, stuffing box, piston rod. If fire is severe then reduce speed to ‘Dead Slow’ and stop engine in consultation with bridge. Isolate blowers and close valve in supply duct. Keep away from relief valves of scavenge manifold and crankcase.
Read in detail about scavenge space fire here
Do not open scavenge manifold or crankcase till temperature falls below 100 degree Celsius. Then clean scavenge space. Inspect piston rod for straightness and alignment. This can be checked by observing movement of piston and piston rod while turning engine on turning gear by operating cylinder lubricators manually. Inspect liner surface. Inspect stuffing box, bottom of scavenge box and diaphragm for cracks. If affected piston cannot be overhauled immediately then engine will have to be operated by reducing power of affected cylinder or by cutting it off from operation.

1)   Cause : Turbine RPM lagging behind engine RPM.
Remedy : Reasonable smoke during acceleration is normal. If engine is running at ‘Dead Slow’ for quite some time then turbocharger RPM may become so slow that it may not pick up after
increasing fuel. During such time engine may smoke. Engine may have to be
stopped and restarted with higher fuel notch to rectify it. If smoke is heavy
governor loading programme will have to be checked.
2)  Cause : Air supply to low due to fouling of air and exhaust passages.
Remedy : Clean fouled spaces at first available opportunity.
3)  Cause : Defective fuel injector or trumpets on nozzle tip due to defective nozzle cooling.
Remedy : Replace defective fuel injector with spare overhauled one.
So these were some of the problems that you might face. If you faced any problem and want to share with us, please feel free to comment below.

How to Deal with Stress and Depression on Ship

This article discusses about the means by which you can beat out the stress or tension that a seafarer might be suffering from when onboard a vessel. It is known fact to all of us, that merchant navy is not all about visiting different places and also earning thousands of dollars. For the time period you are onboard, you might […]

This article discusses about the performance tests that you need to take of the main engine and the auxiliary engines. These tests are required from time to time, thus to make sure that your engines are up to the mark and they are performing as per the makers recommendations. The responsible engineer officer on ship will carry out this job […]