Scavenge Space Fire reasons, detection and actions will be discussed in this article in a thorough details. Scavenge space fire can seriously damage the engines and also will hamper in the working of the same. Such fires should be avoided in any case and same can be done by following simple practices.

Scavenge space, as we know, is an enclosed space under the piston of the engine. Stuffing box on down side and piston on top makes it a closed space. And fresh pressurized air is continuously fed into this space. Accumulation of unburnt carbon and lubrication oil is common and with presence of fresh air all the time, this make it a ideal space for a fire in case there is a heat source available. We are going to discuss all the three parts like reasons, detection and actions.
Read this: Main Engine Alarms and Slowdowns

Since such space always have unburnt carbon residues which can be fuel or lube oil, any contact with the heat source in presence of fresh air will lead to a fire. Heat sources can arise from different reasons which we will discuss later in this article.

These are the reasons but not limited to them:

Blow By: Caused due to broken piston rings, worn out piston rings, excessive wear on the liner. Insufficient lubrication causing scoring of liner. If the Piston rings are sticky, then it will allow the combustion gases to pass through the Piston space. This will lead to increase in the chances of heat available for fire in the scavenge space. 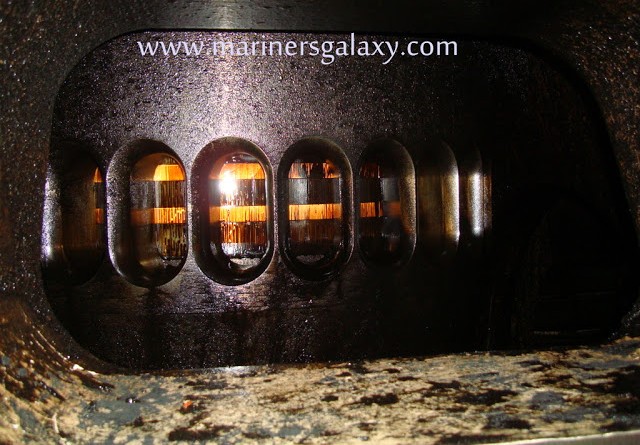 Overheated Piston: This can be because various like the fuel injection system is faulty or fuel injector is dripping. Also if the coolant for the piston is insufficient or less, it will lead to overheating of the Piston. This will make the Piston running at higher temperature and making it a hot spot for causing fire. If the unburnt carbon comes in contact with under side of the piston, it will lead to fire.

Exhaust Gases Blow Back: Exhaust gases if they make their way into scavenge space through the air intake ports, it will be at higher temperature and will lead to fire. This kind of event happens when the turbocharger is surging.

Air cooler failure will lead to high temperature air to reach the scavenge space and leading to fire.

Following events which are mentioned below shows a scavenge fire:

The actions to be taken will depend on the extent of fire and can be limited to one unit or all the units.

Below article will you give you an insight about the actions to be taken in case of fire.

The commanding officer of ‘Philippines Sea’ cruiser was fired from US Navy. Guided Missile Cruiser was taking fuel at Yorktown Naval Weapons Station, and happened to have 4000 gallons of diesel fuel oil spill into the Virginia River. Incident happened on 7th of May .Coast Guard and other related authorities were able to contain the […]

Here some of the awesome tips to keep sail boat engine fit and healthy. An engine is heart of the boat and is the one thing you need to rely a lot when doing critical maneuvers. Though the boat engines, should not give any problems if maintained properly. But they do, and thus it is […]