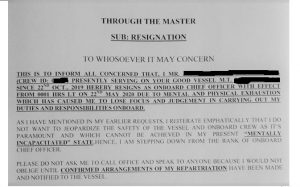 Here is the latest list of DG Approved medical doctors in Gurugram which conducts medicals for seafarers going to sea on behalf of various shipping companies around the globe. Seafarer’s medical is different from other people as it involves various other organizations as well. DG APPROVED DOCTORS IN GURUGRAM OR GURGAON Dr. Sandeep Singhal HealthChek […]

Seafarer Traditions, Rituals and Superstitions- You Must Know

Know about the seafarer traditions, rituals and superstitions. Being responsible for more than 90 % of the world trade and being one of the oldest professions, Everyone shall agree we have seen some serious *insert profanity* J Seafarers have been at the mercy of Nature and more often than not people have relied on superstitions to justify such […]

Well Maersk has a very unique way of hiring people and have adopted a very standard procedure for it. LI and PI are the two important exams that they conducted while hiring a person in their organization. We will deeply go through that.    Maersk PI and LI Test Questions    Also Read: Maersk Interview Questions But first thing first, […]