News is coming from various sources that an oil tanker named SYRA, Malta flagged, was hit by a sea mine. This happened during when ship was taking crude oil near Yemen waters. As per the news that are coming from various sources, oil spill was seen near the ship which is due to major damaged to the hull have happened because of the Improvised Explosive Device or Sea Mine that hit the ship.

All the ships that are transiting the Gulf of Aden have been warned to be vigilant while passing through, as these floating bombs can do substantial damages to the ships. It has also come to knowledge that ship was able to move with its own propulsion system after the blast but will go for major repairs in the Fujairah.

This tweet shows the possible oil leaking from the tanker ship after the explosions happened. Yemen have been in unrest for long time and very few ports are operational for commercial operations. Such incidents raises the concern for peaceful commercial shipping. 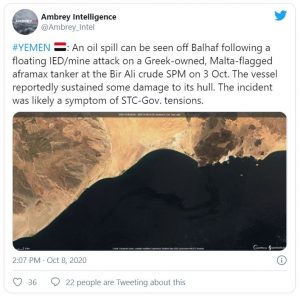 As the news coming from the international shipping, Container ship which was involved in the hit and run case of a fishing boat has been identified by the Coast Guard. On April 10, Container Ship Pacific Express hit a fishing boat around Quy Nhon Port, Vietnam. After hitting the fishing boat, the ship did not […]

Corona Effect: Many Tankers on Anchorages as oil prices dropped

Sudden and drastic reduction in the price of crude oil all over the world due to the lockdown in various parts of the world, has led the tanker to go for long anchorages. The land based storage units have limited space. In this scenario ship owners are using tanker ships as storage units. As per […]