This article is about ice breaker ships. Today, bulk transportation is largely done by sea, But problem arises when the sea is frozen. How do ships will reach at port via frozen waters? Frozen sea can be found in some parts of North America and Canadian coast. It becomes even a greater matter of concern during winter season in Arctic and Antarctic.

To effectively overcome this problem, icebreaker ships are set for the sail in these regions. Icebreakers are especially designed ships and boat which can move and navigate through ice-covered waters and clear waterways for other ships and boats. A ship can be called as icebreaker only when it fulfills three requirements which normal ship lacks: a strengthened hull, an ice- clearing shape and powerful enough to push through ice-sheets.

These ships are excellent at their job because of their hull design. Unlike other vessels, the icebreaker doesn’t have a rounded shape bow, rather it has a smoother portion which allows it to drift more easily over the ice-sheets, results in reduction of opposing forces. As the ship drifts over the ice, its weight come down on the ice sheet which breaks the ice. Smooth hull helps in pushing the ice away from the ship’s way, preventing it from causing damage to the ship. The double hull design ensures the integrity of hull even under extreme conditions. 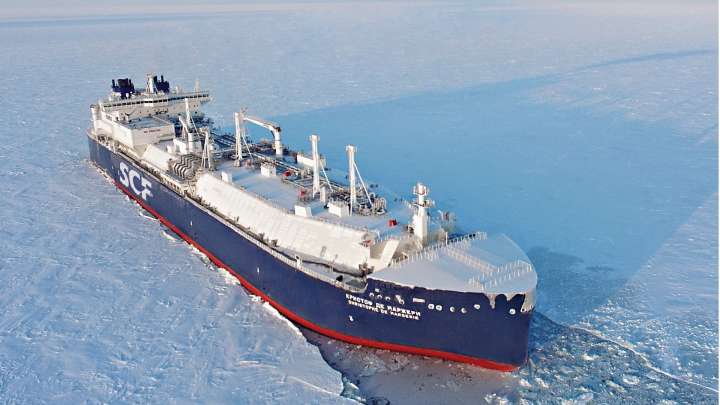 Icebreakers and other ships operating in frozen waters require additional structural toughness against various loads resulting from the contact between the hull of the vessel and ice. As ice pressure varies between different regions of the hull, the most reinforced areas in the hull of an ice going vessel are the bow, which experiences the highest ice loads, and around the waterline, with additional strengthening both above and below the waterline to form a continuous ice belt around the ship.
Having a huge structure, with advantages of large size, weight and power, these ships can glide easily over 3-meter thick ice sheets. Old icebreakers used up to 50 millimeters thick shell plating whereas the modern vessels use high strengthened steel that has yield strength of as as 500 Mpa. The steel featured in modern vessels are also efficient to avoid brittle fracture in low temperature and high holding conditions.

The other compelling feature of modern icebreaker is the  power it brings to crush the ice and make ways for other vessels through frozen waters. The most powerful prevailing icebreakers in the world, two Polar-class icebreakers operated by the United States Coast Guard, has a combined diesel-electric and mechanical propulsion system that consists of six diesel engines and three gas turbines. The diesel engines are coupled to generators that produce power for three propulsion motors altogether, the gas turbines are directly connected to the propeller shafts driving controllable pitch propellers. The diesel-electric power plant can produce up to 13,000 kW (18,000 hp) while the gas turbines have a continuous combined rating of 45,000 kW (60,000 hp).

Nuclear icebreaker ships is one of the latest technology that has been brought into the industry, making it more convenient for the harsh job that these ships are designed for. Question arises why nuclear? Well simply, the fuel demands would be outrageous using any other power source. Burning diesel, the Vessel would use more than 100 tons of fuel a day, and have a severely restricted range as a result. But running on nuclear power, ship burns less than half a kilo (1 pound) of uranium even on the toughest day, at constant full power across 9 foot thick ice.
The specific need of icebreaking vessels make them one of the only cases where nuclear propulsion is economically practical – barring nuclear submarines, which gets the benefit of the fact that the reactors don’t require oxygen to run. Nuclear reactors are more expensive to build than combustion engines and turbines, further, enriched uranium doesn’t come cheap – but at the end of the day, the fuel costs end up being much, much lower than the equivalent diesel engine.

With lots of advancements and technology, certain limitations are yet to be overcome for these massive icebreakers, firstly,the shape of the hull and the bow makes the ice breakers very unstable which makes it roll quite a lot even in relatively calm seas. Moreover the bow shape makes it susceptible to invert by waves since it is not designed to effectively deal with them.
Although, Some ice breakers have anti-roll tanks in order to counter-effect the tendency to roll. These tanks are semi-filled with water in order to stabilize the ship in uneven weather.

[Video]Passengers Airlifted From a Cruise Ship after Engine Failure

For the passengers of cruise ships VIKING SKY vacation at sea didn’t turned out to be the best one. The cruise ship they were on was struck by bad weather and subsequent loose of the engines. The vessel sent distress signal for the help near the coast of the NORWAY. Incident happened on Saturday, 23rd. […]