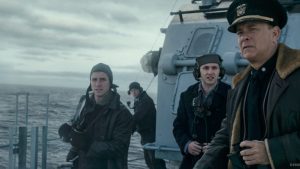 There has been an accident on Maersk Ship- Laura Maersk, in which a crew member has suffered serious burn injury and was air lifted by the US Coast Guard for urgent medical assistance. Vessel suffered explosion somewhere on 4th June and disabled the ship completely. As per the news we have got, the explosion happened […]

Stranded Seaman Yet To See His New Born Daughter

Abhiram Oak is a Merchant Navy officer and currently sailing. Due to travel restrictions imposed by the lockdown he was unable to sign off on time, and thus is stuck on ship since then. Originally planned to get off the ship in month of March, so that he can be at home during the times […]

USS Portland tested its high-energy laser weapon system by shooting laser at a drone and putting it down. This was Navy first of kinds testing of such setup and one step more into the development of such more complex and high power weapons. An unmanned vehicle was made target by laser system. Such tests give […]