This article discusses about how the water level of boiler is kept under control. Two terms and three terms are the controllers that are used in the boiler in order to keep all the parameters related to the steam flow, water feed etc. So, let’s discuss about them in detail.

Water level control is very important process that needs to be carried out on the water tube in order to protect it from getting damaged. As we know that water tube boilers have very less amount water for carrying out steam process, maintaining a correct water level is therefore prerequisite. Generally when we employ electronic circuit for measurement of water level, two terms are always kept in mind namely swell and shrink.

Two terms controller comes very handy in controlling the ill effects caused due to the shrinkage or swell up in boiler. Actually in two term water controller another term know as steam flow is also controlled and thus two terms water level and steam flow are monitored. A differential pressure is fitted with the boiler and it measures any change in the pressure. If the pressure inside the boiler increases, that means we need to bring down the supply of water to the boiler.
As we know that the flow of the steam through the boiler is not uniform, we need something to compile the ever changing signal. To compile this signal, we extract out the square root from the signal. The signal generated from both the pressure difference and the water level controller is fed to the compiler circuit which in turn regulates the feed water supply to the boiler. 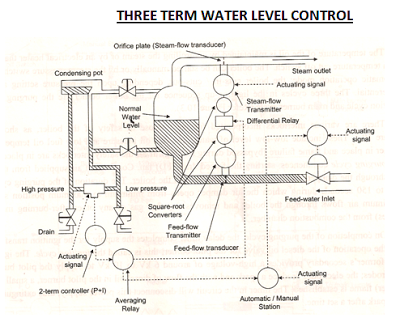 Three term controller working is similar to the two terms controller for boiler but a third variable, that is the variable water supply control is also included in it. Differential relay output is fed to an averaging relay which compares it with the received drum level signal and gives the correcting signal to control valve.  Actuating signal is fed to the supply valve that controls the supply of the water.
In a normal condition the supply of fed water is equal to the steam produced by the boilers and it is kept under the control with the help of a differential relay that controls that keeps things under the normal condition.
It is always better to have three term water level controller in order to get the precise results while the boiler is in the working condition.
Hope you liked my article, please comments for any suggestions.

This is the third article in this series. We have covered topics like Steam, Liner, Control air, Sea Water Line, Expansion tank, Sump, Spanners, O- Rings, Mechanical Seal and Crankshaft Deflections. Questions given here might be useful for you if you are sailing on ship or giving your officers exam. You can read about first […]

ISWAN-International Seafarers Welfare and Assistance Network have launched a new facility for all the seafarers worldwide. Now all the seafarers can ask for help from ISWAN by using the whatsapp. Considering the wide spread use of this mobile messaging app, it actually covers a vast users. Seafarers who wish to take help can message +44 […]