In internal combustion engines or any machinery that involves moving parts, it needs lubrication for the basic reason that it will avoid wear and tear in between moving parts. In shipping where the size of the engines is huge, lubrication requirements are specific and much important. On board ship mainly lubrication is needed for main engines in large scale, so I have discussed this whole article in keeping marine engines at the center. So let’ first see what the functions of lubricants are.

Use of Lubricants in Engine Lubrication

One basic function which we all know is that lubricants tend to form a film between the two moving parts and provided a slippery surface on which metal parts can move or revolve smoothly. So, thus we are avoiding the metal to contact and stop wear and tear between parts. The followings are the function of lubricants:
1. 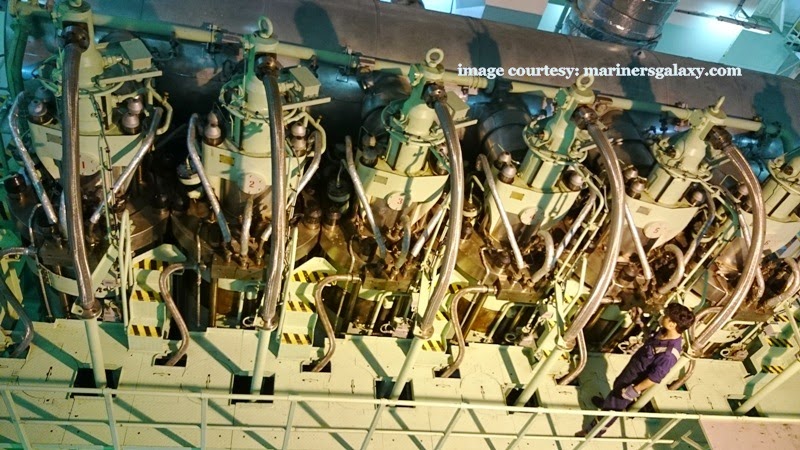 First of all it forms a medium between the two surfaces and thus avoids any metal to metal contact. It reduces static and dynamic friction, and reduces the wear and tear between the parts.
2.
A lubricant also helps to remove to the heat from the bearing which is developed to the high speed of moving parts. So, we are getting a cooling effect also and that is the reason why lubricants are designed to withstand high temperatures.
3.
To protect the metal from getting corroded, lubricants avoid any type of corrosion taking place in the combustion chamber of the engine. Also it protects the engine from cold corrosion.
4.
During combustion and engine being in motion, lots of carbon deposits are accumulated at the end of the moving surfaces. Lubricants have detergency quality and they tend to wash away these carbon deposits and thus avoid deposition of carbon particle locally.
5.
It dampens the load acting on the bearings and also reduced noise that is caused when two surfaces are moving against each other.
Another unique function of lubricants is that they act as a sealant and avoid blow by gases being passed from the scavenge
space to the crankcase space.
They take up the high stresses when the load on the engine increases. So these were some of the functions of lubricants in engine lubrication.

Types of Lubrication in Engines

I have discussed of types of lubrication on the basis of layer of oil between parts and they are as follows:
Hydrodynamic or Full Film Lubrication When two surfaces are separated completely by the presence of oil layer between them, this is called as the Hydrodynamic lubrication. The layer which is present in between two moving parts is unbroken here.

This type of lubrication is generally present in those places where it is difficult to maintain a thick layer such as in the crosshead of the engine. Since the layer between the two surfaces is thin, metal to metal contacts occurs and leads to a little bit of wear and tear.

It is said that type of lubrication that is in the middle of Hydrodynamic and Boundary lubrication is an aid to partial film lubrication.

In this lubrication, the pressure of fluid is not enough to hold the load naturally, so it is pressurized externally with the help of pressure pump. The best example of this is, lubrication that takes place in between the bearing of the engine.

This type of lubrication is totally different from the rest of the lubrication we have discussed till now. It is usually seen where point to point contact taking place between two metal parts. For example the roller bearings and gear have a point of contact. So, a thin film which is formed between the two moving surfaces forms the lubrication medium.

Crankshaft for marine diesel engines have been discussed in this article. They are of many types and is used as per the need for a particular type of requirement. After piston takes away the combustion forces developed during ignition, it transmits forces to crankshaft, and gives it a circular cyclic motion. The shaft and the […]

What are the Different Components or Parts of a Boiler

This article discusses about the different parts or components that are present in a boiler. In this article we will get to know about each every component that is fitted inside the boiler. For example, super heater is the part of boiler that is used to generate superheated steam. Let’s discuss these parts in detail. Different components or parts […]

2 Replies to “Types of Engine Lubrication and Uses”