Reaching from one point to other safely and accurately while being in a sea, is a task in itself which needs well trained navigators who has knowledge about the satellite navigation system or global positioning system, vehicle’s relative location, or position compared to other known locations, how to measure distance on the globe in degrees and what latitude and longitude means when you are in sea.

But centuries ago, when technology was unknown. How great explorer like Captain James Cook travelled all 7 continents and few discovered them?

Some explorers from 4th century, used the method of staying close to the shore and following the shoreline. If a sailor sail out of the sight of land, they would use the North Star(ship navigation using stars)  and the sun to determine the northern and southern directions during the night and day. Some seafarers would use major constellations. And some would use the directions in which the birds flew and the fish swam to find their way at sea which however cannot be trusted completely.

In early 13th century, cartographers designed some charts using the routes of other seamen. But it couldn’t be trusted because they lacked the demarcation of latitude, longitude and distances. By mid of 15th century, compass was discovered, which also somehow didn’t help sailors much due to the lack of knowledge about magnetic field. Few of them thought it to be operated by black magic.
Interesting Article To Read: 5 best tips for easy navigation at sea
By the end of 15th century, Christopher Columbus used a different method called deck reckoning in which the navigator should measure the distance and time from a specific point, such as the port. He would then mark the day’s ending point on a chart, and this point would serve as the starting point for the next day. But to determine the ship’s latitude, he used celestial navigation which involves the sun, moon and stars to determine your position. Celestial navigation is a complex method in which navigators should have intact knowledge of the different constellations at different times of the year, as well as the different constellations in the Northern and Southern Hemispheres. Some of them  are only visible in either of 2 hemispheres.

Scientifically, ship navigation using stars is the use of angular measurements (sights) between celestial bodies and the visible horizon to locate one’s position in the world, on land or at at sea. At a given time, any celestial body is located directly over one point on the Earth’s surface. The latitude and longitude of that point is known as the celestial body’s geographic position (GP), the location of which can be determined from tables in the nautical or air almanac for that year. 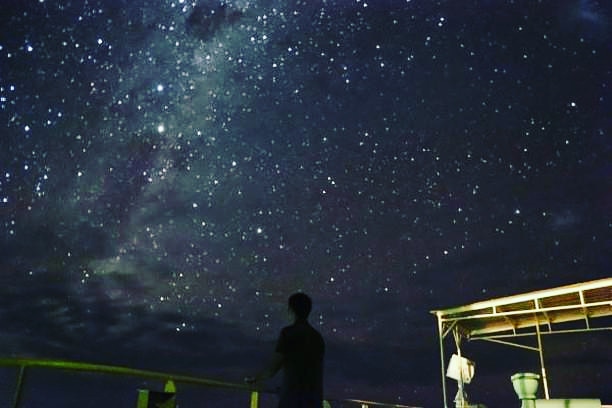 Navigators using this method needs basically a tool such as a sextant which is primarily used to measure angle between any astronomical object and the horizon. Along with it, they need an accurate clock and an almanac giving the positions of celestial bodies.

Modern navigators usually use celestial navigation in combination with satellite navigation to correct a dead reckoning track, that is, a course estimated from a vessel’s position, route and speed. Use of multiple methods helps in detecting errors, and simplifying the procedures. In the event of equipment failure, taking sun lines a few times in a day and using dead reckoning approach allows a vessel to get a rough position which is sufficient to return to port. Navigating through sea voyages nowadays is a lot easier task than back then. After World War II, the development of electronic navigation methods progressed rapidly.

Though now there are modern equipment’s to do the same, but still lot of navigators learns the traditional methods of doing the navigation using the star position and other constellation around the universe.

How to Prepare Ship Engine Before Departure

In this post, get to know about how ship engine is prepared before sailing. For a smoother departure, it is quit necessary to follow guidelines as given by company, also called as checklist. In this article you will get to know about the general, yet important things that you have to do, in order to prepare the engine room for […]

COSCO and China Shipping Line Merger-All You Need To Know

Get to know about Maritime Training Institutes with approved tanker courses as per STCW required by seafarers. As per STCW, you need to do some advance courses for tanker ships, before you join these types of ships. Maritime Industry Authority Philippines have approved below MITS for conducting these courses. Below you will find name of […]